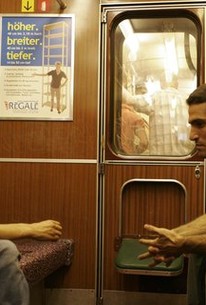 Filmmakers Erez Tadmor and Guy Nattiv expand their award-winning 2004 short into a feature length film tracing the unlikely romance between an Israeli kibbutznik and a Palestinian woman as the meet serendipitously on their way to the World Cup finals in Berlin. Eyal and Rana are two soccer fans who, despite being sworn enemies by birth, cannot deny the sparks that they feel after their bags get mistakenly swapped on the subway. In the three days that follow, these two disparate souls somehow manage to transcend the deep-rooted conflicts that have plagued their people for so long, and find true love in the chaos of world cup fever. Then, just as quickly as she appeared, Rana is gone. As news of a second Israeli-Lebanon war makes headlines, Eyal decides to throw caution to the wind and follow his true love back to Paris.

A warm love story despite its harsh background war story.

Like the film, Before Sunrise, but with a twist - an Israeli guy and Palestinian gal meet accidentally while visiting Berlin and they connect, spend time together then part, but then reconnect with all kinds of other complexities - personal, political and legal which tear at the couples future. This film works because there really is a chemistry between the couple and even though there are many reasons the couple should part ways for good, there is also love tugging to keep them together. Life just isnt simple.