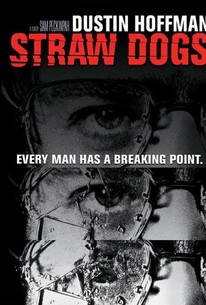 Critics Consensus: A violent, provocative meditation on manhood, Straw Dogs is viscerally impactful -- and decidedly not for the squeamish.

Critics Consensus: A violent, provocative meditation on manhood, Straw Dogs is viscerally impactful -- and decidedly not for the squeamish.

Critic Consensus: A violent, provocative meditation on manhood, Straw Dogs is viscerally impactful -- and decidedly not for the squeamish.

Sam Peckinpah examines the instinctual capacity for violence in his controversial 1971 film, loosely based on the novel The Siege of Trencher's Farm. To avoid the Vietnam-era social chaos in the U.S., American mathematician David Sumner (Dustin Hoffman) moves with his British wife, Amy (Susan George), to the isolated Cornish town where she grew up, but their presence provokes antagonism among the village's men. As the hostilities escalate from routine bullying to the gang rape of his wife, David finds his pacifistic self backed into a corner. When the hooligans attack his house, David finally resorts to the gruesome violence that he abhors. ~ Lucia Bozzola, Rovi

I can think of no other film which screws violence up into so tight a knot of terror that one begins to feel that civilisation is crumbling before one's eyes.

[T]hough doubtlessly reactionary, Straw Dogs has the heat of personal commitment and the authority of deep (if bitter) contemplation.

One of the most ambiguous, neurotic, and disturbing of all American films receives a revelatory new restoration, with supplements that ably grapple with its chaos.

The script... relies on shock and violence to tide it over weakness in development, shallow characterization and lack of motivation.

The most offensive thing about the movie is its hypocrisy; it is totally committed to the pornography of violence, but lays on the moral outrage with a shovel.

Upon first viewing, it seems like a straightforward film, but the more one watches it, the more tension one sees in the relationship between the couple.

Straw Dogs deeply shocked and unnerved me...watch at your own peril.

The ending is breathtaking as an out-of-control, pulse-pounding revenge fantasy.

[Straw Dogs] seemed to me utterly bogus in its reversal of the invariable truth that an expatriate American intellectual is the hunter and the local population the prey.

We see it. but we can't believe it. Nor can Hoffman.

A declining industry has invested over a million dollars In a new form of pornography for which the public are demonstrating they have an Insatiable appetite. That is the problem.

"Who cares if you're an intellectual," Peckinpah seems to inquire, and indeed his hero, played by Dustin Hoffman, is a math scholar and bores anyone when he talks about his work, his passion, and eyes glass over - even his wife's (Susan George). The workman in the small English village they've moved to disrespect him, milking the labor, laughing at him to his face, and eyeing his wife lecherously. "What is it that makes a man a man in a world that only respects violence?" One of the best films ever made if you ask me, looks at some answers.

Straw Dogs is a unique feat in the cinematic medium. This is a highly engaging picture with a talented cast and immaculate directing. Straw Dogs is a relentless violent picture that tells the story of a couple who move out to the countryside and they get terrorized by the locals of a nearby village. The plot is very well layered and structured and for me is one of the standout performances of actor Dustin Hoffman along with his role in Rainman. This is a must see film for film fans and it will keep you hooked right up till the last blistering frame. Now this isn't a horror film, but the events that transpire within the movie are quite terrifying in retrospect and it serves as a powerful and disturbing psychological thriller with slight horror overtones. The aspect of home invasion is always something to fear and is pretty scary. Even if this isn't a straight forward horror yarn, fans of the genre should seek this one out just the same. I very much loved the film, and I think that anyone looking for something truly riveting will surely love this. Be warned, this is a picture that is very violent, but it shouldn't turn you off it either. Sam Peckinpah crafts a stunning piece of cinema that you shouldn't pass up. Straw Dogs is a near flawless picture that is a definite classic. The portrait of its violence is raw and gritty and unflinching. This is what keeps you on the edge and involved from the get go. If you love Dustin Hoffman films, don't miss up on this one. The film blends all sorts of elements to make a picture that stands out above all the rest that comes in this style of storytelling.

After finally watching 'Straw Dogs', I now realised why this film was banned for over 15 years in the UK. There is a certain scene that truly shocked me, as it gave the worst message a man could receive. Despite this, I was gripped for the majority of the film. Both Dustin Hoffman and Amy George gave both emotionally and psychologically unsettling performances, they may put you off from time to time, but you will keep sympathising.