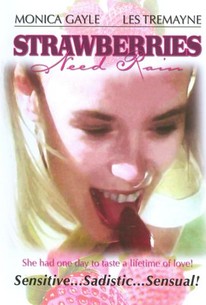 This is low-budget filmmaker Larry Buchanan's "tribute" to Ingmar Bergman. The plot has to do with a poor girl named Erica (Monica Gayle), who engages in various sexual encounters until Death (Les Tremayne) takes her away -- but not before we manage to see her in various (and frequent) stages of nudity. Buchanan claims that this film played in Texas as a Bergman film, and nobody knew the difference -- which could explain why actual Bergman films have never been very popular in Texas.

There are no critic reviews yet for Strawberries Need Rain. Keep checking Rotten Tomatoes for updates!

There are no featured reviews for Strawberries Need Rain at this time.