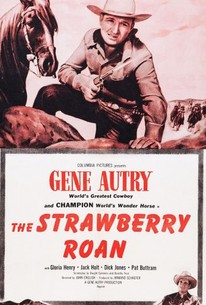 This is the first Gene Autry western to be shot in color. The story is taken from a story by veteran cowboy star Ken Maynard and centers on Autry's horse Champion, who portrays a wily mustang stallion who incurs the wrath of a rancher when it cripples the landowner's son. The trouble began while the youth was trying to saddle break the horse. The rancher's boy was riding Champion for the first time and the horse bucked him off. Not wanting to see the beautiful animal destroyed, Autry runs away with it and is later accused of rustling.

Critic Reviews for The Strawberry Roan

There are no critic reviews yet for The Strawberry Roan. Keep checking Rotten Tomatoes for updates!

There are no featured reviews for The Strawberry Roan at this time.