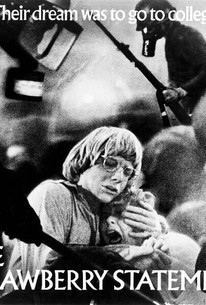 The anti-Establishment protests that lead to the violent confrontation between demonstrators and police at Columbia University during the late '60s provides the basis of this earnest, socially conscious drama. The soundtrack featuring such artists as Crosby, Stills, Nash and Young, and Buffy St. Marie provides a highlight.

Julie Payne
as Woman
View All

Critic Reviews for The Strawberry Statement

Hagmann, got hist training in TV commercials; and all too often it shows through in the flashings and zoomings... the narcissistic awareness of the charm of youth.

an embarrassment for student activists of the period

Never probes beyond the surface over student unrest in its social commentary.

Audience Reviews for The Strawberry Statement

This movie is kinda like a late 60s version of Casablanca, taking place in America, on a college campus. It's very intense, exciting, and dramatic. I really liked this movie, it's fantastic, and I highly recommend it.