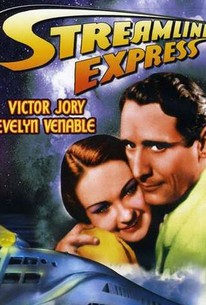 Grand Hotel meets Twentieth Century in this Mascot feature. Evelyn Venable stars as Patricia Wells, a tempestuous stage actress who impulsively elopes on opening night of her newest play. Wells and her new fiancée Fred Arnold (Ralph Forbes) book adjoining compartments on the Streamline Express, while her conniving producer Jimmy Hart (Victor Jory) tags along, disguised as a waiter. This is but one of several interconnecting subplots (including a menage a trois and the impending birth of twins), but it's the most entertaining of the batch. Also on board are Sidney Blackmer, Esther Ralston, and a host of other familiar faces.

Libby Taylor
as Fawn
View All

There are no critic reviews yet for Streamline Express. Keep checking Rotten Tomatoes for updates!

There are no featured reviews for Streamline Express at this time.