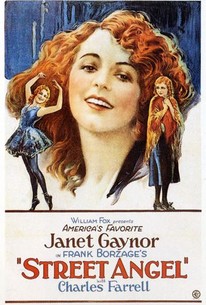 Fox's follow-up to Seventh Heaven, The Street Angel reunited stars Charles Farrell and Janet Gaynor with director Frank Borzage. The action begins in Naples, as poverty-stricken Maria (Gaynor) steals medicine for her ailing mother. Now a fugitive from justice, Maria escapes by joining a travelling carnival, where she meets and falls in love with portrait painter Angelo (Charles Farrell). Impressed by her ethereal beauty, Angelo asks the girl to pose for his portrait of the Madonna. But when she's suddenly arrested, the disillusioned Angelo sinks into depravation. Released from prison, Maria sees her portrait in a church and is inspired to seek out Angelo. Explaining the circumstances of her arrest, Maria saves Angelo from his sordid surroundings, inspiring him to return to painting -- and, not surprisingly, to propose marriage. Heavily influenced by the "Germanic" style then in vogue, Street Angel lacked the simplicity and sincerity of Sunrise but managed to post a profit all the same.

Dave Kashner
as The Strong Man

Jennie Bruno
as Landlady
View All

Street Angel is a Neapolitan romance which starts encouragingly and then settles down to a pace of deliberate dulness.

In Frank Borzage's melodrama, Janet Gaynor's turn as a poor woman who resorts to prostitution must have impressed the Oscar voters for she won Best Actress that year

A well-made movie that can't quite decide exactly what kind of movie it would like to be.

This romantic drama was pretty good, the actors were good, the story was so-so, and everything else was just okay. It is a predictable romance movie in the end, but there is a good deal of realistic elements to it. Overall, it could have been better, though.