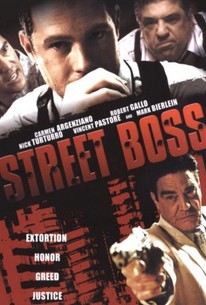 Director Lance KR Kawas draws inspiration from retired FBI Agent Phil Kerby's personal memoirs for this gritty crime drama detailing the violent downfall of notorious Detroit mobster Tony Jack (Robert Gallo). Back in the late 1960s, Jack had the Detroit police in his back pocket, and anyone who dared question his authority was quickly silenced. Little did the feared crime boss realize that his days as an untouchable were numbered, because Agent Kerby (Mark Bierlein) was one cop who couldn't be bought. Nicholas Turturro and Vincent Pastore co-star.

There are no critic reviews yet for Street Boss. Keep checking Rotten Tomatoes for updates!

There are no featured audience reviews yet. Click the link below to see what others say about Street Boss!