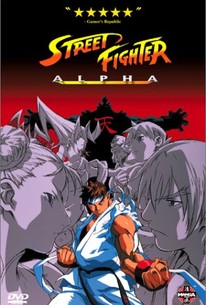 Streetfighter Ryu is destined for a journey of self-discovery. If victorious, he'll be able to control the dark energy threatening to consume him, but there's a problem--Ryu's confidence level isn't what it used to be. Tensions mount as Ryu, along with his allies (some old, some new), presses forward in his efforts to confront Akuma, the bloodthirsty master of the Dark Hadou. United, Ryu's team does what they can to curtail the force that threatens to destroy them all. Street Fighter Alpha is based on the popular Street Fighter II: V series. ~ Tracie Cooper, Rovi

Well, I thought this is not the kind of movie it would have been. I was a big Street Fighter fan since playing the video game at the arcade when I was young. This anime film is really different I never excepted to see new street fighter characters except Ryu, Ken and Chun-Li. I liked the original anime and even the V series because in the end Ryu & Ken ultimately team up. One or the other (usually Ryu) has to get the final hit, but it takes both of them for a victory. Akuma would have given them both a run for their money with his raging demon; Street Fighter fans don't want the throw-away Dr. Sadler crap, we want the real deal - bring on Akuma.

Great animation with a story that seems more in common with Dragon Ball than Street Fighter. Still good for any SF fan.

i was extremely excited for this movie because i am a huge street fighter fan, but i was fairly dissapointed. the story was weak, most of the characters were underused, everytime they made you think they would show a tournament they got one or two matches in and changed the story, and many of the characters i love were absent from this movie. they hyped up an akuma battle that they never showed and they lead up to the climax was better than the climax itself. it had a few bright spots for street fighter fans that makes it an average movie, but it should have been much better.