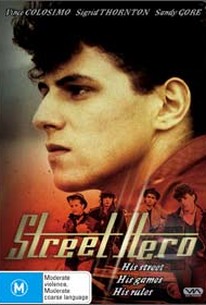 In this complex teen movie, Vinnie (Vince Colosimo) is a young man whose life is an uphill battle: he is an outcast at school because he cannot get along with either teachers or students, he is a local courier for Mafia-boss Ciccio at night and, when not so occupied, spends his time practicing boxing at the gym. He shares his mother's cramped home in government housing with two other siblings, and his mother's lover -- whom he does not like. He is haunted by images of his father (when just a boy he witnessed his father's murder), and his father's boxing career and Mafia involvement set a pattern for Vinnie's current lifestyle. When Vinnie's music teacher Bonnie (Sandy Gore) enters his life, she encourages him to get involved as a drummer with the school band, while his girlfriend Gloria (Sigrid Thornton) and others influence him to stay away from the Mafia. In fact, there are so many characters that circle around Vinnie's life doing their own thing that the focus tends to thin out -- yet the actors and director Michael Pattinson do the best they can with this slightly overcrowded script. ~ Eleanor Mannikka, Rovi

There are no critic reviews yet for Street Hero. Keep checking Rotten Tomatoes for updates!

There are no featured reviews for Street Hero at this time.