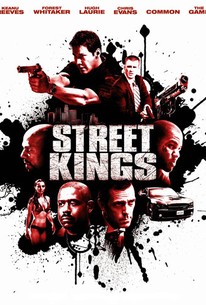 In the wake of the L.A. riots, an LAPD vice detective who always went above and beyond the call of duty to keep the streets safe receives a startling wake-up call that leaves him convinced he can no longer employ the tactics that made him so effective in his work. LAPD veteran Tom Ludlow (Keanu Reeves) has borne personal witness to the worst that the streets have to offer, and when his partner, Detective Terrance Washington (Terry Crews), is killed the violence strikes a bit too close to home. Now Ludlow is on a mission to bring his partner's killer to justice, though Captain Walker (Forest Whitaker) is concerned that the hotheaded detective is taking the case too personally. Now, as Captain Walker attempts to convince Ludlow to work within the confines of the law, Internal Affairs Captain Biggs (Hugh Laurie) begins following the vengeful lawman's every move. In order to accomplish his mission, Ludlow recruits fresh-faced Robbery Homicide Detective Diskant (Chris Evans) to trace Washington's killers through the winding streets of Los Angeles. Later, when Ludlow and Diskant come face to face with the remorseless cop killers, they must chose between upholding the law and seeking bitter vengeance.

Cedric the Entertainer
as Scribble

The Game
as Grill

Daryl Gates
as The Chief

Carlos Amezcua
as Co-Anchor
View All

Keanu Reeves' bad-boy cop Tom Ludlow may not play by the rules, but the film sure does.

There's plenty of empty bravura, and Reeves is fundamentally blank and uninteresting.

Last-minute revelations emerge screaming from around the corner like squad cars you heard coming half-an-hour ago, and it all ends with a dull thud instead of a crash wallop. Long after you've stopped caring, it's finally over and out.

What could have been endearingly daft remains merely forgettable.

Swimming in bloody violence, Street Kings has plenty of holes, and it is way over the top. But you also have the sense that the filmmakers are not trying to exaggerate.

Still, as corrupt cop films go, Street Kings has got its moments, and if nothing else it certainly does entertain.

There's only the spectacle of crooked dunces slamming against each other

A lot of reviewers seem to have disliked Street Kings because of its negative view of the LA police, and perhaps the country at large. That is not a problem for me.

Everything here is predictable, from the tired plot whose revelations are deeply unsurprising to the gritty dialogue and casual everyday violence of the cops involved.

There is certainly something compelling in the film's ideas, but the way they're executed suggest that any true questions about morality and the law are just grist for the action mill.

Very interesting L.A. cop thriller with Keanu Reeves in his best role and performance since the Matrix films. Not only does he need more than one facial expression here, his character is wonderfully ambiguous and unusual in his oevre. The film offers a smart and enthralling plot while enjoying its own immorality. The action is well timed, and it's just fun and exciting to see the noose tighten around the main character, while cheering for him nonetheless. There are several plot twists you don't see coming and you'll certainly stick around for the ending. The supporting cast is excellent too. Overall an intense, enthralling, violent and realistic look at the good, the bad and the immoral in the war against crime. Excellent.

Top of the line Crime Action Movie where Bad Cops are running the Streets. Can not say enough about this movie. Keanu Reeves and Forest Whitaker are at the top of there game in this one. A must see and Must add to the Collection. 5 Stars without any doubt.

It wasn't that bad! I actually liked it!

I think it's one of the few times that a movie completely surprised me. I went in thinking that it was going to be something like Speed, but this is an excellent movie. The cast did a tremendous job, especially Keanu Reeves, who clearly gave his best performance of is career. It is a perfectly written crime epic from James Ellroy, who always delivers a great story.