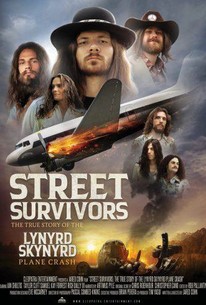 In 1977, a plane carrying Southern rock legends LYNYRD SKYNYRD mysteriously runs out of gas mid-air en route to a concert, crashing into a dangerous Mississippi swamp while killing several of the band members, crew and both pilots. STREET SURVIVORS: The True Story of The Lynyrd Skynyrd Plane Crash tells the story thru one of the survivors, drummer Artimus Pyle, who not only survived the fatal crash (that claimed the life of the band's founder and front man Ronnie Van Zant amongst others), but who also bravely pulled the remaining survivors out of the plane wreckage before staggering towards the nearest farmhouse in rural Mississippi to seek help.

Needless to say, no one will exit "Street Survivors" humming the absent "Free Bird," or being very high on flight at all.

Feels like viewing only the dramatic reenactment parts of a far more interesting documentary, and being left with a movie that could easily be categorized as plane crash-sploitation.

The casting for the movie is actually very good ... However, the film's direction and tone go back and forth between being hokey and suspenseful ... It's hard to imagine a lot of people loving this movie, because so much of it is disturbing to watch.

It's tacky and self-aggrandizing, while conveying nothing about what made Skynyrd's music so brilliant in the first place.

There are no featured reviews for Street Survivors: The True Story of the Lynyrd Skynyrd Plane Crash at this time.