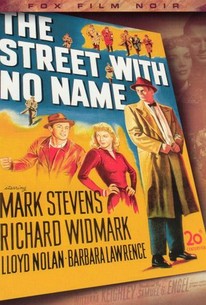 The Street with No Name Photos

FBI operative Mark Stevens is dispatched by his boss Lloyd Nolan to infiltrate a criminal gang. Stevens ingratiates himself with Richard Widmark, the gang's leader, then helps concoct a robbery that will deliver the criminals into the hands of the authorities. But there's an informant in the police department, who gets word back to Widmark. Aware that there's a stoolie in his gang, Widmark automatically assumes that his wife Barbara Lawrence is the guilty party, and beats her senseless. Eventually determining that Stevens is the "mole," Widmark methodically plans to kill Stevens during a holdup; by this time, however, the FBI is a step or so ahead of him. Remade in 1955 by Samuel Fuller as House of Bamboo. ~ Hal Erickson, Rovi

Howard I. Smith
as Commissioner Demory

Robert B. Williams
as Sergeant
View All

Critic Reviews for The Street with No Name

As a cops-and-robbers extravagance, it would be a good, if stubbornly routine, job. Its special distinction is that it pauses every few minutes for an illustrated lecture on the internal operations of the FBI.

This dreamscape of vice is the American cinematic paradise, a visual and aural carnival appropriate to the gang leader played by Richard Widmark in high psychotic gear.

...engaging thanks to some expectedly hard-bitten dialogue and Widmark's charismatic, sinister performance.

The film noir gets its colorful flavorings from star Richard Widmark playing another psychopathic killer like he did in Kiss of Death.

Audience Reviews for The Street with No Name

Essentially a propaganda piece with J. Edgar Hoover's fingerprints all over it. Still, it's taunt, methodical and filled with noteworthy performances. Not great but not at all bad.

When you base a crime movie on actual cases they're either brilliant or boring. This one is in between.

Richard Widmark offers his usual fine performance but the film is seriously dated.

A noir that isn't necessary, but good.

The Street with No Name Quotes