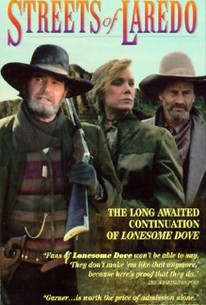 This miniseries follows the original Lonesome Dove miniseries, and both are based on the characters created by Pulitzer Prize-winning author Larry McMurtry. Although much of the cast has changed from the original, the compelling saga is as satisfying as ever. The Western tale continues with the gritty Captain Woodrow Call (played this time by James Garner), a former Texas Ranger who is hired as a bounty hunter to track down the elusive and brutal Mexican gunman Joey Garza (Alexis Cruz). The characters Pea Eye Parker (Sam Shepard) and Lorena (Sissy Spacek) also return in this moving and atmospheric drama.

Critic Reviews for Streets of Laredo

I was completely caught up in this gritty Western.

Audience Reviews for Streets of Laredo

This is the best and favourite Larry McMurtry western movie than the original Lonesome Dove. James Garner made his magnificent performance as the role of Capt. Woodrow Call, and his final scene is at once heart breaking and resonating with strong quiet hope. A wonderful cast does memorable work, especially Sissy Spacek, Sam Shepard and Randy Quaid. In this film, pure of heart may not necessarily mean pure of deed, but at least evil is evil and good is good. It bravely balances the aformentioned violence with scenes of wry humour and gentleness.