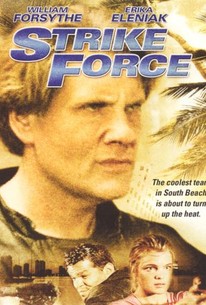 A woman searching or her missing sister in Miami's dark underbelly makes a horrific discovery in the third feature from stuntman-turned-director Mike Kirton. Sandi (Erika Eleniak)'s sister has disappeared after traveling to Miami. Upon arriving in the bustling city to seek out her sister, Sandi's discovery of an underworld kidnapping ring soon leads her to a group of undercover vigilantes led by a man named Simon (William Forsythe). When the determined sister teams with Simon to discover the secret behind her sibling's strange disappearance, each step closer to the truth leads to a new threat and greater danger.

Sarah Uhrich
as Model
View All

There are no critic reviews yet for Strike Force. Keep checking Rotten Tomatoes for updates!

There are no featured reviews for Strike Force at this time.