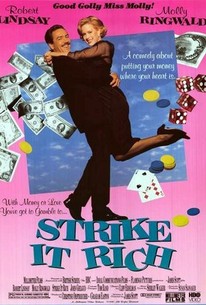 Ian Bertram (Robert Lindsay) is a mathematical genius who works as an accountant for a multinational firm based in England. When he meets Cary Porter (Molly Ringwald), who recently started working for the same company, Ian immediately falls in love and quickly proposes marriage. Cary accepts, and they plan a modest wedding, but when Ian's accounting skills earn him the admiration of company head Herbert Dreuther (John Geilgud), Herbert offers to pay for a honeymoon in Monte Carlo and give them a ride back on his yacht. But while Mr. Dreuther means well, he has problems with his memory, and once Ian and Cary get to Monte Carlo, Herbert has forgotten all about them. Stuck at the hotel with a large bill that he can't afford, Ian works out a plan to win at roulette; his scheme works, and he earns enough to pay their bill, get them home, and have plenty left over. But his sudden success at the gambling tables makes Ian drunk with power, and Cary discovers that her new husband has turned into a power-hungry tyrant. Strike It Rich was adapted from the novel Loser Takes All by Graham Greene; it has been shown under the novel's title, as well as under the title Money Talks.

Claude LeSache
as Man with Chips

Patrick Holt
as Man with Wink

William Ross
as Man at Theater

Jack Raymond
as Cashier at Casino

Nicolas Mead
as Barman in Hotel

Willie Ross
as Man at Theater

Mark Tandy
as Mat at Sitra

Harriet Reynolds
as Telephonist at Sitra

Christine Hewett
as Lady of Odd Couple
View All

Critic Reviews for Strike It Rich

There are no critic reviews yet for Strike It Rich. Keep checking Rotten Tomatoes for updates!

There are no featured reviews for Strike It Rich at this time.