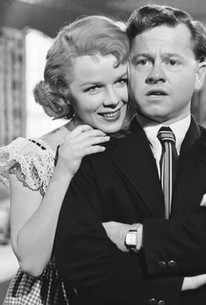 Mickey Rooney returned to his "home" studio MGM, after a three-year absence, in the location-filmed melodrama The Strip. Rooney is cast as Stanley Maxton, an aspiring drummer who has the misfortune to fall within the orbit of bookie Sunny Johnson (James Craig). Out of the goodness of his heart, Stanley introduces aspiring actress June Tafford (Sally Forrest) to Johnson, hoping that the latter's Hollywood connections will help the girl find success. Stanley also quits the rackets to play drums at a nightclub owned by his pal Fluff (William Demarest). Things take a sorry turn when Johnson decides to make a play for June; Stanley interferes and gets beaten up by the bookie's goons. June's response to this outrage results in tragedy for everyone. The Strip is a surprisingly downbeat effort for producer Joe Pasternak, a man usually associated with happy, wholesome Technicolor musicals. The film is highlighted by jazz performances from Louis Armstrong, Jack Teagarden, Earl "Fatha" Hines and Barney Bigard.

Bert May
as Specialty Dancer

Donald Kerr
as Clerk
View All

Critic Reviews for The Strip

It's an above-average mystery story that could be categorized as film noir because of Rooney's pained expression as a victim of love.

Audience Reviews for The Strip

There are no featured audience reviews yet. Click the link below to see what others say about The Strip!