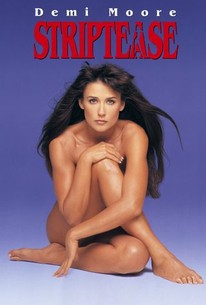 Critics Consensus: Striptease can't decide whether it is a lurid thriller or a sexy satire - which becomes a moot point as it proves disastrously incapable of pulling either off.

Critics Consensus: Striptease can't decide whether it is a lurid thriller or a sexy satire - which becomes a moot point as it proves disastrously incapable of pulling either off.

Critic Consensus: Striptease can't decide whether it is a lurid thriller or a sexy satire - which becomes a moot point as it proves disastrously incapable of pulling either off.

Based on Carl Hiaasen's satirical novel, Striptease tells the story of Erin (Demi Moore), who has just gotten a divorce from Darrell (Robert Patrick), the sleazy ex-con she foolishly married. However, the judge's memories of Darrell's days as a football hero win him custody of their daughter, and Erin, concerned for her child's safety, is determined to fight the decision. Erin has just lost her position as a secretary for the FBI, so, to cover her legal bills, she takes a job as an exotic dancer at a strip club called the Eager Beaver. While she has no experience taking off her clothes in front of an audience, Erin soon makes friends with the fellow dancers and finds a protector in the club's burly but good-hearted bouncer, Shad (Ving Rhames). She also makes a few fans among the regulars at the club, most notably David Dillbeck (Burt Reynolds), a drunken lout with a bottomless appetite for sleaze -- who also happens to be a conservative congressman with ties to right-wing religious groups. One of Erin's admirers snaps a photo of her with the congressman when a brawl breaks out at the club, and he suggests that it would make fine blackmail material. However, when the man with the photo turns up dead, Erin discovers that Dillbeck's people play a bit rougher than she expected. The home video version of Striptease contains two minutes of footage that was clipped from the theatrical release in order to win the film an R rating. ~ Mark Deming, Rovi

Keith Blaney
as Bachelor No. 1

Marc Chaykin
as Bachelor No. 2

Darreck Crane
as Patron in Club

Marco Assante
as Patron in Club
View All

I don't know if the lawyers are currently scanning the contracts for Striptease in order to find out what went wrong in the small print, but someone got badly conned; and that someone is mostly the audience.

Yet another case of the star's salary being much more interesting, and exuberantly vulgar, than anything the screen reveals.

The Striptease script... is at a loss for any kind of drama between Moore's dances. Not for a second do we care about her as a mother, wife or working woman.

The film's premise is thinner than the heroine's G-string.

Bergman, who made The Freshman and Honeymoon in Vegas, provides quotable one-liners for everyone (especially Rhames), and a bevy of strippers lend colorful albeit stereotypically ditzy support.

'...a better than average crime-thriller with some salty characters and a propulsive, scabrous plot....

Striptease is not a disaster like that other expensive ecdysiast extravaganza, Showgirls, though if it were, it might at least have some redeeming camp awfulness to enliven its otherwise dull mediocrity.

For all its matter-of-fact nudity and wealth of silicon-heavy exotic dancers, the film lacks any palpable sense of eroticism.

Although the movie is a bit too long, oddball humor and a likable cast keep it entertaining.

Striptease is an amiable comedy with ambitions to be a satire, but its thriller plot keeps getting in the way of the yucks.

If Demi strutting around like a skinned chicken in an excessive amount of strip scenes doesn't make you want to die, the constant use of Annie Lennox and eurythmics songs will do it for you.

Striptease was a big miss of a film. The film is a total waste, and has some of the worst performances that I've seen. The film is pretty pointless. The story is paper thin and has no redeeming factor. Not even Demi Moore's nice rack can save this atrocious picture. The cast is very questionable and their performances seem too fake for my taste. This film is awful. There's absolutely no other way to describe it. The performances suffer because the actors are terrible. The film is not engaging one bit, and it's just a big boring attempt at trying to make a good film. Obviously the film has gotten attention for Demi Moore, and it is really the only point of interest of this film. Not even that can save the film. This film is poorly acted, directed with a bad cast and a poor script. Striptease fails to entertain, and though we see Demi Moore's lovely assets, the film has nothing else going for it. A terrible, pointless film that should've never been made. Striptease aside from Demi Moore naked is not a good film; the film lacks a very good story, good story and everything else that makes a film good. I don't understand how this trash got made. A pointless and stupid film, Striptease is not good entertainment and is easily forgettable because the film is so mediocre. An awful film that should be avoided. This film also shows that Demi Moore isn't that good of an actress either. So aside from Moore naked, you're not missing much. If you want to watch it, proceed with caution. One full star for Demi Moore's figure!

Not as bad as I was expecting! Way too long at close to 2 hours, must have been so they could fit in so many scenes of Demi stripping. Surprised to see Ving Rhames and Robert Patrick were in this along with a funny Burt Reynolds. Quite funny in places and well... plenty of nudity to!

Not much of an game changer, Demi Moore takes on the role of a stripper, trying to keep custody of her kid, and trapping a senator to do so. It's more of a cheese fest than anything, but I've gotta admit that Moore has some serious moves.