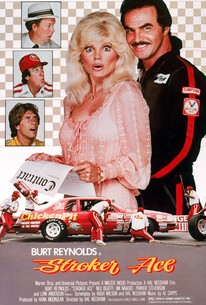 Burt Reynolds plays an arrogant, womanizing and mischievous Southern race-car driver in this fast-paced comedy that is rife with good ol' redneck humor. When not driving, he enjoys raising the hackles of his boss, fried chicken magnate Clyde Torkle, and ogling at his biggest and bustiest fan.

Cassandra Peterson
as Girl with Lugs

Madonna Christian
as Girl in Bar

Harry A. Gant
as Nascar Driver

A knuckleheaded but amiable summer trifle.

Burt Reynolds used to make movies about people's lifestyles. Now he seems more interested in making movies that fit in with his own lifestyle.

It's a witless retread of the earlier, far funnier road-movie collaborations of Mr. Needham and Mr. Reynolds.

Burt Reynolds hits new lows as he mugs his way through this film.

A zany cornpone comedy that made me laugh. So sue me.

Burt turned down "Tems of Endearment' to do this one. At least he met Loni.

Burt and Ned should be ashaimed of themselves.

Runs out of gas after about 30 minutes.

In the middle of the 'Cannonball Run' franchise (between 1 and 2), after 'Hooper', and towards the end of the 'Smokey and the Bandit' franchise (before the third), Needham and Reynolds teamed up again with this effort. Easily the weirdest movie title I've come across for some time, it sounds like a porn flick, funny thing is its actually the main characters name. So the fact this is a Hal Needham movie, you can guess its gonna be about fast cars. Yep, fast cars, Burt Reynolds, some blonde eye candy and crashes, business as usual. This time Reynolds is actually a genuine race car driver on the NASCAR circuit...instead of the regular dashing cowboy. But this being a Reynolds character, this race car driver is of course arrogant, flashy and carefree of virtually everything around him, your basic narcissistic Reynolds character. Sounds good huh, well let me ice your balls down a tad. So Ace loses his sponsor by generally being an asshole, so he has to find another. Along comes Torkel (Ned Beatty) who runs a fast food chicken franchise offering Ace a deal, did I forget to mention Torkel's director of marketing and public relations is the blonde bombshell Loni Anderson? Well that pretty much explains why Ace accepts the deal without reading shit. He then spends the entire movie (along with his mechanic Jim Nabors) trying to get out of this bad deal which sees him opening fast food joints and dressing up in a chicken suit. Yes that is in fact the whole plot in a nutshell, and yes you're right, it is extremely thin on the ground. This really does come across as a lame attempt to squeeze another fast car flick out of Reynolds by either Needham or Warner Bros. I mean seriously, the aim of the movie is for Ace and co the try and get fired by Torkel, so they don't have to do the stupid things they agreed to do by the contract. At times this does include some racing which is filmed at the famous locations of...Charlotte Motor Speedway, Talladega Speedway and Atlanta Motor Speedway. Now this might sound impressive but it isn't really as much of what we see is stock footage (clearly), and the sequences filmed for the movie are obviously done so in front of sets and small crowds. The racing segments are too damn obvious, clearly racing at a slow speed and clearly not in any real danger of anything despite what the plot wants you to think. Sure Reynolds does appear to be behind the wheel of a real moving car as we've seen in his other car flicks, but there is zero tension or thrills here, nothing to engage you at all. To top that you don't really see much racing either, a few minutes of car footage, some refueling, some wheel spins, some cars grouping bumper to bumper (at slow speeds), that's it. Its then a quick cut to the finish where Reynolds generally wins if he hasn't been beaten by his incredibly cliched young, good looking, blonde, male rival. Every racing flick protagonist has to have an arch rival antagonist who's usually blonde and younger, or the same age. When Ace isn't racing he's doing these promotions for Torkel's chicken franchise. Obviously these things aren't suppose to be genuinely funny or of high quality, they are suppose to be hokey and embarrassing for Ace, but its embarrassing to watch! There is literately nothing remotely interesting to see in these scenes, its not funny, its not clever, Loni Anderson in skimpy attire doesn't make it any better (well...) and Jim Nabors ISN'T funny dagnabbit!! At the same time Beatty as Torkel is a quite disgustingly stereotypical southern hick type who really made me not want to visit the American south. His chauffeur is played by Bubba Smith...but I don't know why because he does nothing accept lift a car up when a jack breaks. That's the sole reason why they cast the guy, for that one visual strength gag, good grief! Yeah so spoiler alert (who cares!), in the end they manage to trick their way out of Torkel's dastardly contract, with the help of Feeny (Anderson) who of course falls for Ace during the run time. Did anyone really NOT see Loni Anderson's character failing to fall for Reynolds slimy charms? You know what's gonna happen in this movie from watching the first five minutes, and no I can't overlook that. Thing is, what Ace and co do to break the contract, isn't that deception and kinda illegal? pretty sure you can't pretend to be a big company and pretend to offer to buy someone out. Yeah so if you like Needham's rollicking stunt flicks then look elsewhere, there is none of that here. This is a weak entry and offers no excitement at all from either the racing or the characters. The only plus points I can think of, that some folks might like here, is the historic car porn on display and the casting of various famous NASCAR drivers (none of whom I have any clue about).

Not a good movie. Not at all. Sorry Burt and Hal, but the magic is gone.

There is something about Burt Reynolds movies that bring me back to a time of cheesy 80's male dominated roles with stupid humor. The thing that makes these movies good is the cheap humor and the bloopers at the end. The thing that makes these really bad is the stupid humor and the bad acting and the fake Burt Reynolds hair. This one is no exception and is just an all around bad movie, but it is funny to watch and remember how horrible 80's action movies really were.