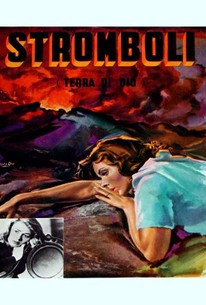 This drama is an example of Italian neorealist filmmaking from noted director Roberto Rossellini that was produced in Hollywood and may therefore be more accessible to American artists than other offerings. It stars Ingrid Bergman as Lithuanian war-refugee Karin, who marries Italian fisherman, Antonio, so she can get out of a hellish internment camp. He takes his new bride back to his native island of Stromboli. Despite her efforts to fit in, the locals reject her and soon she comes to regard the island as a bigger prison than the one she just left.

Renzo Cesana
as The Priest

Mario Sponza
as The Man From the Lighthouse

Far from disguising or downplaying the production's methods and realities, Rossellini puts them into the foreground and builds upon them the movie's grand emotional world-and his grand social and spiritual vision.

The film gets off to a weak start, dawdles along to an anemic climax, comes to a shaky conclusion... Stromboli has none of the artistic merits of Open City or Pasian, both Rossellini pictures.

There's a riveting early scene with the village priest, and then once you hit the fishing-horror scene, it is pretty much all unforgettable...

Director Roberto Rossellini complains it was ruined by inartistic editing in North America. Somebody ruined it, that's for sure.

A pivotal bedrock formation in cinema and no mistake

Rossellini scandalized the United States with this excellent and daring drama about an unfortunate woman stuck with small-minded people on a volcanic rock, and it hits us with powerful scenes that are hard to be forgotten, like the horrific tuna fishing and the volcano explosion.

Ingrid's great fall from Hollywood's graces was spurred by this flat drama and her involvement with its director. I'm sure their marriage brought her more fulfillment than this turgid exercise in neo-realism does to the viewer.