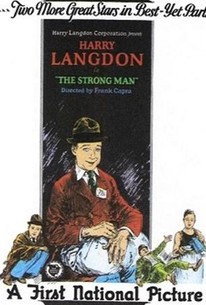 The Strong Man was the second starring feature of silent screen comedian Harry Langdon--not to mention first feature-length directorial effort of Frank Capra. Langdon plays a Belgian soldier who, during World War I, is captured by German conscript Arthur Thalasso. Almost immediately, the armistice is declared. Having nowhere else to go, Langdon sticks with Thalasso, who in civilian life is a popular circus strong man. When Thalasso gets the opportunity to tour the US, Langdon is delighted; at last he will meet minister's daughter Priscilla Bonner, with whom he has been carrying on a romance-by-correspondence. Arriving in New York, Harry wanders around the street with a photo of Bonner, asking passers-by if they know the girl. Jewel thief Gertrude Astor, hoping to use Langdon as a dupe in order to evade the cops, claims that she is the girl he's looking for. A marvelous comic set piece ensues, beginning with Langdon's clumsy efforts to carry the unconscious Astor up a long flight of stairs, and ending with Astor's athletic "seduction" of the confused little immigrant. When Langdon finally finds the real Bonner, he discovers she is blind--just as well, he reasons, since she regards him as something of a strong, strapping hero-type, which he most decidedly is not. Subsequent plot complications involve a corrupt element that has taken over Priscilla's town, and a wild climactic sequence wherein puny Langdon must try to pass himself off as strong man Thalasso...and through plain dumb luck, gets away with it! Far better seen than described, The Strong Man is one of the sweetest, funniest comedies of the 1920s. Harry Langdon would never again have a vehicle so perfectly suited to his "grown up baby" screen persona; if you've never seen this unique comedy genius in action, catch this film when the opportunity arises.

Arthur Thalasso
as Zandow the Great

Critic Reviews for The Strong Man

Harry Langdon is a comedian, to be sure -- unquestionably the greatest comedian that has appeared since Gilbert Seldes discovered Charlie Chaplin. Nevertheless, it is pretty hard to laugh uproariously at The Strong Man.

A pellucid early study for It's a Wonderful Life

There are no featured reviews for The Strong Man at this time.