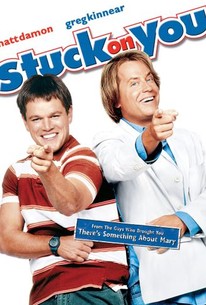 Critics Consensus: An unusually sweet and charming comedy by the Farrelly brothers. Fans may miss the distinct lack of bodily fluids though.

Critics Consensus: An unusually sweet and charming comedy by the Farrelly brothers. Fans may miss the distinct lack of bodily fluids though.

Critic Consensus: An unusually sweet and charming comedy by the Farrelly brothers. Fans may miss the distinct lack of bodily fluids though.

Stuck on You Photos

Bob and Walt Tenor are small-town legends who excel at sports, and who are the proud owners of a fast-food restaurant where their four hands work the grill at lightning speed. When the acting bug bites Walt, he convinces Bob to honor their childhood pact to never hold back the other, and the brothers head west for the bright lights of Hollywood. Bob and Walt make fast friends with their sexy neighbor, who helps Walt land a grizzled agent whose idea of a prime gig for Walt is a porn film. Things finally begin to look up for Walt when the boys encounter legendary diva--and Academy Award winning actress--Cher. Looking to sabotage her new television series, of which she wants no part, Cher casts Walt as her co-star. Instead of dooming the show, Walt propels it to the top of the ratings, and the brothers became instant celebrities. But their real adventure is only beginning, as Bob finds romance with a longtime cyber-pal, and the brothers make a decision that will forever change their lives. Whatever happens to the boys, one thing is certain: nothing will ever come between them.

Wen Yann Shih
as May

Meryl Streep
as Herself

Griffin Dunne
as Himself

The Artist Formerly Known As Docky
as Short-Fused Geezer

Will Coogan
as Eddie

Michael Lee Merrins
as Umpire No. 1

Jonathan Cauff
as Umpire No. 2

Roger Fan
as Executive No. 1

Jennifer Azar Burnham
as Executive No. 2

Mariann Neary
as Purse Babe No. 1

Terez Kocsis
as Purse Babe No. 2

Catherine McCord
as Jogger Babe No. 1

Kelly Albanese
as Jogger Babe No. 2

Paulina Neely
as Jogger Babe No. 3

Ann Stocking
as Casting Agent No. 1

Tracy Ashton
as Casting Agent No. 2

Joe Steilen
as Casting Agent No. 3

Nate Steilen
as Casting Agent No. 4

Joni Friedman
as Casting Agent No. 6

Ellen Jacoby
as Casting Agent No. 7

Carrie Yazel-Steilen
as Casting Agent No. 8

Steve Cohen
as Casting Agent No. 9

Pat Battistini
as Space Alien No. 1

Doug Jones
as Space Alien No. 2

Justin Alioto
as Beaze Fan No. 1

Will Dunn
as Beaze Fan No. 2

Terry Nicholson
as Beaze Fan No. 3

Bennett Yellin
as SPFX Man No. 1

Gregory Wyler
as SPFX Guy No. 2

Sergio Garcia
as Himself

Jesper Parnevik
as Himself

Billy Andrade
as Himself

Luke Wilson
as Himself

Tom Brady
as Computer Geek No. 1

Lawyer Milloy
as Computer Geek No. 2

Gino Torretta
as Beaze Thug No. 1

Bruce Armstrong
as Beaze Thug No. 2

Keith A. Hoffman
as School Principal

Zachary Woodlee
as Dancer No. 1

Dani Lee
as Dancer No. 2

Lisa Ratzin
as Dancer No. 3

John R. Corella
as Dancer No. 4

Tara Nicole
as Dancer No. 5

Christopher D. Childers
as Dancer No. 6

Jenni Osborne
as Dancer No. 7

Monica Horstmann
as Dancer No. 8

Melanie Gibbs
as Dancer No. 9

Kevin Black
as Dancer No. 10

Daniel Bourgoin
as Dancer No. 11

George Drija
as Dancer No. 12

Rubin Pinor
as Dancer No. 13

Vincent T. Bingham
as Dancer No. 14

Roman Lomakin
as Dancer No. 15

Ania Zalewski
as Dancer No. 16

Jeannie Mustelier
as Dancer No. 17

Jacquelyn Dowsett
as Dancer No. 18

News & Interviews for Stuck on You

View All Stuck on You News

Critic Reviews for Stuck on You

It is a satire on Hollywood hypocrisy, and is, without doubt, the (Farrelly) brothers' finest -- and most subversive -- film to date.

What first feels like thin skit material gets funnier and sweeter. Damon and Kinnear make a terrific team.

An inoffensive one-joke valentine to freaks and geeks.

A one-joke affair about conjoined twins that feels like it bypassed the scripting stage and was filmed directly from the pitch, the comedy remains resoundingly unfunny despite the strained efforts of stars Matt Damon and Greg Kinnear.

In spite of a convincing make-up job and the best efforts of its cast, "Stuck On You" falls as far short of the mark as the Farrelly Brothers' "Shallow Hal" (2001).

When not overindulging in birth defect humor, this shock comedy divides its attention between two equally-annoying sub-themes: degrading females and prominent product placements.

An entertaining comedy that gets drowned in too much sap and fails because of it.

A lesser Farrelly brothers movie, but it's got enough laughs and kindness to call it a success.

...in trying to be too politically correct, the Farrellys simply make things too saccharine.

Audience Reviews for Stuck on You

The Farrelly Brothers go mainstream and go Hollywood in one fell swoop with this film that's less on the shock or off the wall elements that they're typically known for (beyond the opening premise) and sure to include as many celeb cameos as humanly possible (hitching a ride on a possible gravy train!). Although well thought out and executed at the end of the day the work fails to connect, which is why nobody notes the thing in reference to nobody nohow. Ever. An okay if disappointing great-might-have-been.

Doesn't get the laughs of some other Farrelly Brothers movies, (Dumb and Dumber, There's Something About Mary and Kingpin still being their best), but Stuck on You displays a humanity and sensitivity that's absent from a lot of their films as they go somewhere where I've never seen another movie go: a story about conjoined twins. It's a decent skewering of skin-deep Hollywood, but ironically, it's one that never quite gets beneath the surface. The Cher bits were good, though - why did she take this role? - and this is one of my favourite Greg Kinnear performances... and if you know my reviews, you know the guy annoys the heck out of me, so that's saying a lot. A few great jokes and some funny cameos, but overall there's nothing too special here.

Hilarious! A must see!

a massively funny, smart, and underrated comedy. in the vein of the comedies on the 90's, damon and kinnear played off of each other perfectly and the humor worked for me from start to finish.

Stuck on You Quotes