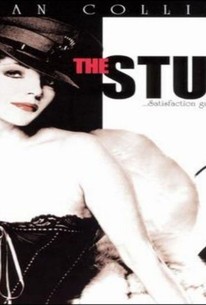 Joan Collins stars in this film, written by her sister Jackie Collins and based on her novel. In the story, Fontaine Khaled is married to the owner of a nightclub. She is sexually insatiable and forces an ambitious young waiter, now the nightclub's manager, to try and keep her satisfied.

Critic Reviews for The Stud

This is a dreadful film.

Too mild to qualify as soft-core pornography, the film suffers from an implausible story line that makes it of little interest to audiences generally.

Terrible acting, dire script and very unsexy, The Stud is one more reason to be thankful the 1970s are over.

Audience Reviews for The Stud

This is kind of a depressing film. I saw it during an all-night grindhouse event, and even the thrill of seeing a pink-tinged crummy print of this borderline porn film didn't bolster it any. You know, I actually quite liked Tony the Gigolo, though that might have just been the result of a process of elimination. He's not the nicest guy in the world, but he seems to be drowning in a cesshole of selfish, rich, spoiled evil sluts who seem to have been pulled straight from the Laclos novel. Joan Collins plays a horrible and entitled rich skank who, though married, seeks sex anywhere else and takes great pleasure in being smarmy and insincere. I think the biggest problem with this film is that it centers on Tony, who, though he is a likeable character, doesn't come out on top in the end. This film is a picture of his slow downfall and his loss of everything important to him, which would be delicious is he were a disgusting slimeball, but he's not. This movie's main character is really its villain: Joan Collins' character, Fontaine. In which case, the story should revolve around her as well, and the audience should be allowed to see past her veneer of flippant and catty wit and see the deep and pathetic insecurity that it obviously conceals. Maybe that happens in its sequel, but I don't even want to see it. This movie could have been salvaged if it had been a hardcore porn picture. At least pure carnal pleasure is some sort of pleasure to be gotten from that, but instead we are left with faux sensuousness between reprehensible characters. It's all very depressing, actually. It's so strange to watch a movie and be consumed by all the ways it could have been better, but wasn't. I'd like to personally overhaul this picture in several different directions.