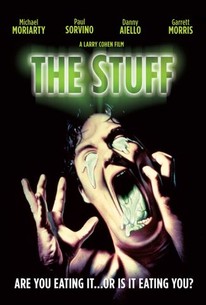 Former NBC-TV scriptwriter Larry Cohen directed this surreal, violent horror spoof that features a sweet-tasting white confection that looks like ice cream oozing up from the ground. A hamburger-chain operator, Colonel Spears (Paul Sorvino), teams up with an ice-cream maker, Chocolate Chip Charlie (Garrett Morris), to tap into the sticky blob's commercial potential by turning it into a best-selling confection. The trouble is, the stuff turns people who consume it into addicts and then into zombies, as it eats away at them from the inside. Messy and grotesque scenes dominate the satire, which stars Michael Moriarty as the investigator trying to discover the secret behind the violence. Moriarty and Sorvino would go on years later to team up on television's Law and Order. Cohen livens up this film with cameo appearances by several television commercial personalities, including Clara Peller, the "Where's the beef?" lady.

Heidi Miller
as Girl in Franchise

Tammy Grimes
as Herself

Laurene Landon
as Guest Star in "Stuff Commercials"
View All

Critic Reviews for The Stuff

Peopled by leaden or hackneyed characters...The Stuff is further burdened by special effects of the most pedestrian kind.

Its execution never lives up to its scrumptious satiric premise.

The Stuff is a wildly ambitious movie that fails because it forgets to attend to its bottom line. Before you can make a clever, funny, satirical horror film, first you have to make a horror film.

Though The Stuff isn't as effective as Cohen's more heralded titles (including the first installment of his It's Alive trilogy), it has all the hallmarks of his perverse sense of eco-terror.

There are a lot of empty calories in this cheapie, but it's so outrageously indulgent it rises above so much other B-movie fluff.

The Stuff probably won't make anybody's list of best films of the year, but it is an inspired, goofy, fast-moving piece of sci fi silliness, probably destined to become a cult favorite.

The Stuff isn't a genre defining B-Movie by any means, but it's a rather unique and fresh example of the crazed originality such a genre possesses. You just can't get enough!

Audience Reviews for The Stuff

It is so appallingly awful that it doesn't even work as a commentary about the kind of crap people ingest without knowing what it is, and so it is only trashy, nonsensical, with a ridiculous sense of humor and terribly directed by someone who clearly has no idea what mise-en-scène is.

Very good B movie horror. The Stuff directed by Larry Cohen is an entertaining comedy horror film that has enough good elements to make this an entertaining ride. The plot is great, and there's plenty to enjoy about this film. Though flawed, this is a terrific forgotten gem from the 80's that is worth your time if you're looking for a horror flick that is bizarre but fun, then this is a must see. The premise for this film is pretty neat, a gooey substance grows from the Earth and is discovered that is delicious, and addictive. Unfortunately The Stuff controls the mind and eats the victims insides. Complimented with good, gory effects, The Stuff is a memorable B movie that will thrill horror fans looking for terrific forgotten gems like this one. I personally felt that The Stuff is one of the best unheard horror films of the 80's, cheesy premise for sure, but this is terrific entertainment. If you want an interesting and quite unique horror film with a social commentary; then look no further than The Stuff. Larry Cohen crafts a good film that despite its flaws is lots of fun to watch. Like I've stated earlier, this is one of the best unheard of horror comedies of the 80's. Definitely an underrated film that deserves to be seen by horror film fans. What makes this film appealing is the interesting premise and if you love B movie films from the 80's, and haven't seen this film, do so when you get the chance. The Stuff is a cheesy classic of 80's horror cinema, and it delivers .

A very fun B-Horror Noir, and one of Larry Cohen's best. It's not going to blow your mind, but it's very watchable.

The Stuff is a fantastic B horror movie. Yes it's sort of cheesy, but this movie is fun as hell. This is the kind of movie I can see Elvira hosting on a late night Creature Feature. It almost plays off like a cheap 50's B sci-fi/horror film that would see at a drive thru. The Stuff isn't scary, it's not intense, and it's not that gory. The Stuff is just an entertaining, wacky, and wild romp! You can't take this movie seriously or you'll be hugely disappointed. Larry Cohen's intentions wasn't about making a serious movie. The Stuff is strictly tongue in cheek. Everything in this movie was done for a purpose. From it's bad acting, to the playful script and many cuckoo characters...all of this works to the film's advantage. The Stuff is another great movie for the Halloween season. Another thing...The Stuff looks so damn deliciously good and creamy. I would eat it in a heartbeat. F**k being invaded by it's evilness! It looks so damn tasty!

"An Entertaining Slice of B-Movie Schlock" - eFilmCritic "I wasn't sure what to expect from this movie. I knew it would be cheesy, because of the title and plot, but I didn't expect to find it so fun to watch." - Upcoming Horror Movies "This movie is hilarious! Doesn't really show much script wise, but it's so funny. Anyone who likes some of the lesser-known films of the 80's might appreciate this little gem." - Bloody Disgusting.com "The Stuff isn't the deepest or most thought-provoking production of all time, but it does make a valid point and does so in an intelligent and amusing way. It's a great way to spend an afternoon and has a genuine charm that one can enjoy." - Scared Stiff Reviews "For fans of sly horror movies with something to say, this is The Stuff you're looking for." - Apollo Movie Guide "More or less forgotten in today's day and age, The Stuff is an enjoyable, cheesy 1980s horror film from director Larry Cohen. Though it's classified as horror, it isn't scary at all. It's really more of a campy film with a neat premise, and with social commentary to lend it more credibility." - Silver Screen Reviews "***1/2 Larry Cohen's The Stuff is perhaps best described as Don Siegel's Invasion of the Body Snatchers meets Irvin Yeaworth's The Blob, replete with a black humor, Z-movie premise, presented via Swiftian satire, as the director highlights the absurdity of mass consumerism in a manner akin to George Romero's Dawn of the Dead." - The Horror Review "The Stuff is as entertaining as a movie about Killer Yogurt can get. All the stock characters are in place, the cliché playbook is run through with a fine toothed comb and as you might expect the movie is appropriately gooey." - Brokedown Cinema