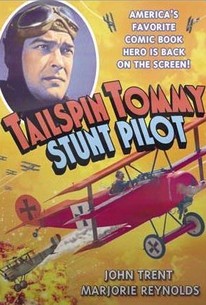 Stunt Pilot is a typically lively entry in Monogram's "Tailspin Tommy" series. Hired to work on an aviation picture, ace pilot Tailspin Tommy (John Trent) immediately runs afoul of obnoxious, grandstanding stunt flyer Martin (George Meeker). Obliged by the script to shoot down Martin in one scene, Tommy discovers to his chagrin that his "prop" gun has been filled with real bullets. Naturally our hero is accused of murder, and just as naturally the guilty party is someone else involved in the film-within-a-film. Most of the aerial dogfight scenes were culled from Howard Hughes' WW1 epic Hell's Angels. Returning from previous "Tailspin Tommy" adventures are Marjorie Reynolds as the hero's sweetheart Betty Lou and Milburn Stone (Gunsmoke's Doc) as his best pal Skeeter.

John Day
as Tex
View All

There are no critic reviews yet for Stunt Pilot. Keep checking Rotten Tomatoes for updates!

There are no featured reviews for Stunt Pilot at this time.