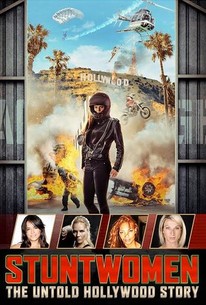 Being a stuntwoman takes discipline, strength, coordination, courage and a sense of humor to get through the pain. Leaping over walls, taking a punch, landing a kick, feeling the heat of an explosion, and sometimes holding dangerously sharp objects, these are the routine dangers stuntwomen face at the office. Directed by April Wright (Going Attractions: The Definitive Story of the Movie Palace) and narrated by Michelle Rodriguez (Widows, The Fast and the Furious), STUNTWOMEN: THE UNTOLD HOLLYWOOD STORY is the inspiring untold story about the unsung professionals, their struggles on screen to perform at the highest level, and their fight off-screen to be treated fairly and equally. The movie takes us behind-the-scenes and introduces us to the female stunt performers who drive the action and thrills of Hollywood's biggest blockbuster movies from the silent age of cinema to present day.

Ben Mankiewicz
as Self

Jeannie Epper
as Self

Julie Ann Johnson
as Self

Jadie David
as Self

Donna Evans
as Self

Paul Verhoeven
as Self

Paul Feig
as Self

Anne Fletcher
as Self

Al Ruddy
as Self

Debbie Evans
as Self

Donna Keegan
as Self

Amy Johnston
as Self

Heidi Moneymaker
as Self

Keisha Tucker
as Self

Jessie Graff
as Self

Angela Meryl
as Self

Cheryl Lewis
as Self

Jennifer Caputo
as Self

Kelly Roisin
as Self

Deven McNair
as Self
View All

Director April Wright has paired younger stuntwomen working today with older women who worked in the industry... It's an interesting device that works well to underscore how the industry has changed -- and in many ways how it has not.

Stuntwomen is a documentary where significance outweighs simplistic filmmaking, and the access and subjects give it enough energy to keep it roughly engaging.

While the documentary successfully champions stunt women's dignity in the workplace, it lacks finesse - failing to showcase their talents in a way that would be exciting for an audience outside the industry.

While the result may be scattershot at times, the achievements of these badass professionals are worth a look - especially if, like this writer, you believe an Oscar category for stunt performers is long overdue.

A really fascinating look at a corner of the movie industry that isn't really talked about much.

There are enough highlights to make Wright's documentary worthwhile. I think it may serve as an inspiration for girls to learn stunt work.

Thanks to stirring interviews, exciting set footage, and an intimate look at what it takes to get the job done, Stuntwomen kicks major ass.

Through her interviewees, director April Wright has proven that stuntwomen are the magicians of the movies and are on-cue in demanding from folks of filmdom-from execs to audiences-their overdue appreciation.

Michelle Rodriguez, a star of the "Fast and Furious" movies, advocates for all stuntwomen to receive the recognition they deserve. One of the best documentaries of the year!

Stuntwomen: The Untold Hollywood History is a pretty good basic introduction to the craft and the people who pursue it, albeit one that will leave most viewers wishing that it had contained a little more substance in the end.

Wright's fascinating and entertaining documentary about the unsung heroines of film and TV shows it's still sometimes two steps forward and one step back (probably in high heels and off a tall building).

Really enjoyed hearing these stories and learning more about a profession I really don't know much about.

There are no featured reviews for Stuntwomen: The Untold Hollywood Story at this time.