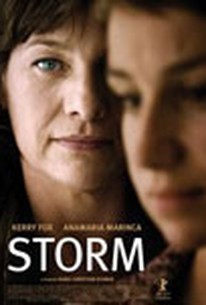 A prosecutor at a tribunal in the Hague attempts to convince a potential witness to testify in a crucial case against the man accused of deporting and killing Bosnian-Muslim civilians in a small town now known as the Republika Srpska in this tense courtroom drama from director Hans-Christian Schmid. Hannah Maynard is determined to make Goran Duric pay for his crimes against humanity. Her case is complicated, however, when a key witness in the trial becomes ensnared by the contradictions of his own testimony. In order to gain a better understanding of the facts of the case, the court sends a delegation to Bosnia, where the suspicions regarding the reliability of the witness are quickly confirmed. When the witness commits suicide, it begins to appear as if Duric will walk free. Now, Hannah's last hope of keeping the case alive is to travel to the witnesses' funeral in Sarajevo. There, Hannah comes into contact with the witnesses' sister Mira, who seems to know more about the defendant than she readily admits. Hannah works hard to gain Mira's trust, eventually convincing the girl to face her fears of the past and testify in the Hague. When Duric's defense team attempts to have Mira's testimony disallowed and finds their efforts unexpectedly supported by the members of the judiciary, Hannah realizes that her greatest adversaries aren't necessarily at the docks, but standing right beside her in the courtroom every day. ~ Jason Buchanan, Rovi

The rewards of this crisp, resigned drama revisiting the horrors of the Bosnian conflict are the same as its flaws.

One of those issue-of-the-month co-productions by which Europe, between golden ages, makes a living.

Saved by the talent on display both in front of and behind the camera, Storm just about retains its title as an intense political thriller.

The Hague's sterile offices and endless grey urban sprawl could have made Storm drab; thanks to the cool eye of the filmmaker and the two leads, it's anything but.

Storm is harrowing, provocative and deeply probing yet quite involving.

A political thriller with real-world resonance.

Under the geopolitics is a strong undercurrent of sexual politics: the men secretly make their deals without a thought to the women whose lives and commitments are on the line.

Shot in an appropriately dry, non-sensational style, German director Hans-Christian Schmid's courtroom thriller does a decent job of exposing the complexities of the issue and the way bureaucratic cowardice can blight and skew morality.

It's a bit talky and office-bound, but is full of relevance as it looks at the thorny issue of justice in a politically charged situation

Neither sexed-up nor dumbed-down, Storm is both absorbing and satisfying.

Occasionally, the dialogue clunks but a winningly vulnerable performance from Marinca goes a long way to building up a picture of a compromised world of political horse-trading where even war criminals can get away with it.

Good drama! Not terribly fast moving, but I tend to like that sometimes if the story is intriguing enough. The acting was very, very good. The storyline was very interesting. A lady prosecutor is hellbent on making a war criminal pay for his crimes. A witness is determined to make this same war criminal pay for the horrible things that he was responsible for by helping the prosecutor bring him to justice. All was well played out. I enjoyed it.