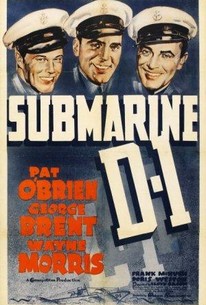 With the considerable input of ex-Navy officer Frank Wead (who wrote the script) and technical adviser Cmdr. G. W. D. Dashielle, Submarine D-1 is far more realistic than the usual run of maritime melodramas. Pat O'Brien and Wayne Morris star as Butch Rogers and Sock McGillis, old submarine hands stationed in Panama. On land, Butch and Sock battle over pretty Ann Sawyer (Doris Weston). At sea and underwater, however, our two heroes are virtually inseparable. The documentary-style direction of Lloyd Bacon serves to heighten suspense when, during war games, Submarine D-1 is disabled deep, deep below the surface, endangering the lives of all on board. Ronald Reagan originally had a sizeable supporting role in this heady combination of laughs, thrills, and romance, but Reagan was cut from the final release print (though he still received billing in the film's pressbook). ~ Hal Erickson, Rovi

Dennie Moore
as Arabella
View All

There are no critic reviews yet for Submarine D-1. Keep checking Rotten Tomatoes for updates!

There are no featured reviews for Submarine D-1 at this time.