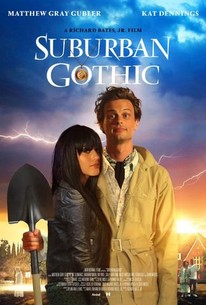 Raymond has a prestigious MBA, but he can't find work. He can channel the paranormal, but chatting with a cute girl mystifies him. Kicked out of his big city apartment, Raymond returns home to his overbearing mother, ex-jock father, and beer-bellied classmates. But when a vengeful ghost terrorizes the small town, the city-boy recruits Becca, a badass local bartender, to solve the mystery of the spirit threatening everyone's lives. (C) New Normal Films

Sally Kirkland
as Virginia
View All

"Suburban Gothic" misses the mark, but thanks largely to its cult-worthy cast, the miss can still be fun.

The movie plays quite well for a while but begins to run out of steam in its second half.

The real joy of the film is the sharp dialogue and huge personalities in this satire of a suburban hell.

Suburban Gothic is a hipster's Poltergeist that boasts more of Richard Bates Jr.'s darkly comedic wit, but more importantly, it's a strong second feature that showcases one of the more vibrant up-and-coming horror filmmakers the genre has to offer.

Some solid stuff emerges in the mix, but it's unsatisfying overall, trying too hard to look like it doesn't care.

It won't be to everyone's taste, but for those who like it offbeat, it's well worth a look.

Suburban Gothic is ultimately a hodgepodge of horror comedy, as too many components working against one another turn the film into something forgettable.

Anthony Marcusa
We Got This Covered

Richard Bates Jr.'s second film, Suburban Gothic, is a bit rough around the edges at times, but none of that gets in the way of the high energy and generous laughs packed into a tight and very funny 90 minutes.

a ramshackle, tone-deaf curiosity, with just about enough funny moments to make the more meandering scenes and pointless digressions pass by - but... it is not just that Bates shows potential to improve - he has already done much better.

This movie is really quite fun. It's proof that all you need to have a good movie on your hands is a great cast and a good script that makes proper use of the actors. I know I sometimes harp on low-budget films, whether it be the presentation or the quality of the cinematography, I don't try to do it as much, but I've noticed that I tend to do so more in the films that end up not being good. The point of the matter is that you don't need much of a budget to make a good movie, I know that should be obvious, but I think some people have this preconceived notion that if a film looks a certain way, The Avengers for example, then it's worth watching. And it's not even that this film even looks that low-budget, it actually doesn't, but it's something that I've noticed in certain people. Again, I've done it myself, but only with films where the story or the acting isn't good to begin with. But I digress, while I may not have given this film the highest rating, I really did have a blast watching this movie. I think the fact that it's not a consistent film, in parts, is what holds it back for me. But the film is definitely well-written and there's a surprisingly interesting relationship between Raymond, his father and how Raymond's eccentric behavior has affected his father's opinion of him. Ray Wise plays Raymond's father and he is tremendous here. If you've seen Ray Wise on Newscatchers, or any Ray Wise movie ever, then you know the type of role he plays, but he does it to perfection. There's a lot of good interplay between Ray Wise and Matthew Gray Gubler. Kat Dennings and Matthew also have great chemistry with each other and they provide plenty of funny moments. One of the things about the film, and this is just me speculating, but the way the film ended up almost made this seem like a pilot for a potential series with Matthew's and Kat's characters at the forefront. This isn't the case since both Matthew and Kat are part of CBS shows, Criminal Minds and 2 Broke Girls respectively. But that's how the film ended up and I actually wouldn't mind a series with the same cast. It's unlikely, because the movie is definitely more indie-esque and it's not a show that wouldn't really survive much on a big network, it's more of a Netflix/Amazon/Hulu original show. But I digress, I thought the film's cast was top-notch and it made the film so much easier to watch. There's also some surprisingly solid horror elements. What I mean by that is that while they mix in some comedic elements with the horror, it's treated fairly seriously by the leads, well at least Raymond and Becca. Don't have much else to say, I don't think the film is as consistent as it could've been, but I really had a lot of fun watching this movie. It's one that I think will find a cult following and deservedly so. I'd definitely recommend this film for sure. Good stuff.