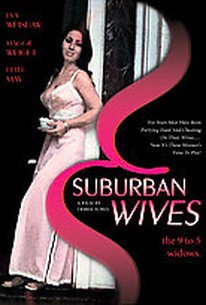 Written and directed by Derek Ford, the British Suburban Wives is a spicy satire of modern manners and mores. Newspaperwoman Eve Whishaw relates the separate stories of eight married couples. The husbands are satisfied with their lot, but the wives are bored, bored, bored. The manner in which the ladies add a little fun to their lives originally earned this film an X rating. Current prints of Suburban Wives have been toned down to a hard "R". ~ Hal Erickson, Rovi

Peter May
as John

Eva Whishaw
as Sarah
View All

There are no critic reviews yet for Suburban Wives. Keep checking Rotten Tomatoes for updates!

There are no featured reviews for Suburban Wives at this time.