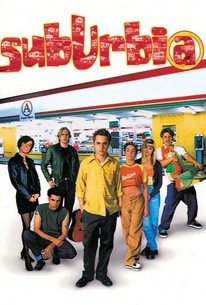 Critics Consensus: Suburbia succeeds in its blistering, ensemble-driven exploration of middle America, though it never quite reconciles the disparate stylings of director Richard Linklater and writer Eric Bogosian.

Critics Consensus: Suburbia succeeds in its blistering, ensemble-driven exploration of middle America, though it never quite reconciles the disparate stylings of director Richard Linklater and writer Eric Bogosian.

Critic Consensus: Suburbia succeeds in its blistering, ensemble-driven exploration of middle America, though it never quite reconciles the disparate stylings of director Richard Linklater and writer Eric Bogosian.

A gang of suburban slackers spend an evening hanging out at a local convenience store in hopes of seeing an old high-school buddy whose career as a rock singer is about to hit the big time. As they wait, memorable portraits of their young lives emerge. Directed by Richard Linklater and featuring a script by Eric Bogosian, Suburbia is a strongly character-driven comedy that offers sharp insight into the joys, sorrows and struggles of being 20 in the mid 1990s.

Their conversation, originally written by Bogosian for a stage play, is talky, but I like that. It doesn't seem too theatrical to me because these characters have absolutely nothing else to do except talk.

Linklater is collaborating with a certified grown-up who also happens to be the screenwriting equivalent of a shock-jock; laid-back bong-hits have been supplanted by endless black-comic cruelty and a lot of sociocultural pissing and moaning.

This brooding comedy fails to blend the sensibilities of two artists, director Richard Linklater and writer Eric Bogosian, which couldn't have been more different--the only thing they share together is a concern with youth's discontent.

Hard-edged drama about some soulless twentysomethings.

"Idealism is guilty middle-class bullshit" Having already delivered Slacker and Dazed and Confused beforehand, Richard Linklater's third film, SubUrbia, somewhat confirmed him as a voice for the disillusioned youth and their struggling transition into adulthood. This is a common theme among his films and has lasted from his debut in 1991 to his most recent 2014 film Boyhood. It's seems to be his niche and one that will surely continue in his future endeavours. Jeff (Giovanni Ribisi), Tim (Nicky Katt) and Buff (Steve Zahn) are three aimless friends that do nothing more than hang around their all-night convenience store, drinking, eating pizza and bitching about life in general. On one particular evening, they await the arrival of old high-school friend Pony (Joyce Bartok) who is now a successful musician. As the night progresses, though, tension, jealousy and resentment grow. Taking a break from writing duties and focusing on the work of playwright (and sometime actor) Eric Bogosian, Linkater finds a project that is not unlike his own material. However, there's a slightly angrier and darker piece of work here that's a little out of Linklater's usual comfort zone. Like a lot of his films there's very little in terms of plot as it focuses on a bunch of friends hanging out and discussing their lives, the choices they've made and where their futures might lie. Again, like many Linklater films, it doesn't sound too appealing on the surface but he has a real knack for capturing natural dialogue and performances and that's where the film really finds it's feet. The always reliable Giovanni Ribisi waxes philosophical in true Linklater fashion while we have Steve Zahn lightening the mood in a film that's predominantly concerned with pessimistic conversation. Linklater, once again, has a good eye and feel for small town, Texan mentality and he films with a colourful vibrancy whereby many scenes and exchanges of dialogue could have been cut and pasted directly into Dazed and Confused and they'd appear seamless. The sticking point of the whole affair, however, is the running time; it's just shy of the two hour mark and you do get the feeling that characters overstay their welcome, particularly as the tone of the material gets darker and more depressing. That being said, this is still another enjoyable outing from Linklater. A sharp and observant character piece that fits comfortably into Linklater cannon of films and once again showcases his ability to capture the disenchanted, cynical youth on the periphery of society. It's one that fans of his will not be disappointed in. Mark Walker

Jeff: It doesn't matter what I do as long as I don't care about the results. And that's why now, I'm getting naked.  I really didn't think I was going to like this movie after the first twenty minutes. All that was going on was the characters saying "Fuck you" a lot and flipping everybody off, while they walked away backwards. But from the movie turned into a good little hang out/what are we going to do with are lives, "Oh nothing, that sound good" film. It's sporadically funny and takes some turns towards the dark and tragic.  I do like the honesty of the film. The characters sit around and the ones that have given up drink heavily and the ones that have aspirations of bettering their lives talk about stuff they truly don't understand. When it comes to these hang out movies, this isn't one of the better ones. Linklater did it better with Dazed and Confused and there are others like Barry Levinson's Diner which far exceed SubUrbia. That isn't to say that this is a bad movie, because it happens to be an intelligently written(Eric Bogosian) and directed film.  The movie runs a little long for the content and it doesn't seem like they really knew how to end it. I wasn't expecting so much to occur during the last act because nothing occurred during the first two. This is a plotless movie, that threw a lot of heavy issues into the mix, especially down the home stretch. It sort of started to feel like a mess and it started to feel  a little longwinded, but overall it made its points while being funny and entertaining.  Suburbia is worth a look, especially if you like movies that occur in a day or a night. Don't watch it if you don't like movies that really don't have an active plot. All this really is, is conversations between characters. Think Mallrats, but a lot heavier.

I saw this years ago when I was a completely different person, so I freely admit I'd need to see it again before giving it a proper review. What 1997 Me though was that it was pretentious, really didn't go anywhere and that its soundtrack was so much better than the movie itself. It was like the asshole little brother of Singles or something. Oh, and for as smoking as Parker Posey was at the time, it didn't justify having to see Giovanni Ribisi's dick. I don't care how good an actor the guy's become.