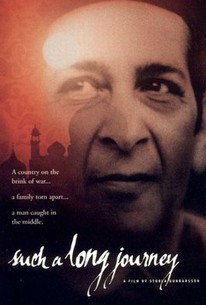 Based on Robinton Mistry's biting epic novel of the same name, this drama recounts the spiritual and physical consequences that result when a decent man allows himself to be convinced to perform an illegal act in the name of patriotism. The story takes place in India, 1971, a time when the country was fighting Pakistan for control of Bangladesh. Middle-aged Parsee Gustad Noble (Roshan Seth) has spent most of his adult life caring for his wife and children. With a sickly daughter and an estranged grown son, Noble feels dissatisfied and bored with his life until he reunites with his estranged friend Jimmy Bilimoria (Naseeruddin Shah), who asks Gustad in a letter to launder money for his cause. Though normally known for his impeccable morals, Gustad agrees to do so, employing the assistance of his dimwitted co-worker Dinshawji (Sam Dastor). This film was shown in the "Special Presentation" category at the 1998 Toronto Film Festival. It also received numerous "Genie" awards in its native Canada.

Rakesh Shrivastav
as Municipal Worker No. 1

Arun Kanan
as Municipal Worker No. 2

Critic Reviews for Such a Long Journey

[Such a Long Journey] is a film so rich in atmosphere it makes Western films look pale and underpopulated. It combines politics, religion, illness and scheming in the story of one family in upheaval, and is very serious and always amusing.

Director Sturla Gunnarsson keeps things going at a straightforward pace and easy distance so that we become involved in the day to day life of these characters without being too close or too far away.

To watch the film is to feel somewhat cheated. Unfortunately, it is clear we are viewing the cut-and-pasted pieces of a larger and presumably more moving whole.

Audience Reviews for Such a Long Journey

There are no featured audience reviews yet. Click the link below to see what others say about Such a Long Journey!

Such a Long Journey Quotes