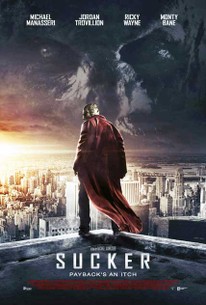 Jim Crawley (Michael Manasseri) is having a really bad day. He gets fired from his job, his car is towed and impounded and he discovers his wife is having an affiar with his arch enemy. To make matters worse, Jim gets abducted by an evil scientist (Ricky Wayne) who is conducting illegal human testing on a vaccine against a deadly mosquito borne virus speading across the planet. It turns out that years of exposure to nuclear radiation and mosquito DNA don's mix well...Jim transforms into a half man/half mosquito hell bent on revenge....Mosquito Man - Payback's an Itch

There are no critic reviews yet for Sucker. Keep checking Rotten Tomatoes for updates!

There are no featured reviews for Sucker at this time.