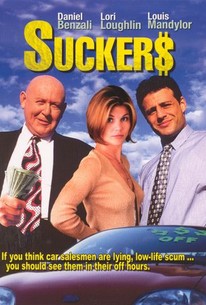 Daniel Benzali stars as a scowling pit bull of a car salesman in this comedy directed by Roger Nygard. Bobby (Louis Mandylor) seeks employment at Southside Motors, where Reggie (Benzali) trains his employees to bilk his customers out of as much cash as possible. Things go astray in Reggie's tightly run venture when loan sharks visit to call in some of Bobby's substantial debts. Suckers was screened at the 1999 AFI/L.A. Film Festival.

One thing is certain, the energetic movie tries hard to be the best that it can be, which is a lot of fun.

How can you help but love a movie that starts with a title card reading, "This shit's true..."

I rate it a lil high because it is about the car biz and I have seen many of the things up close. It has a drug and robbery plot that are unnecessary. Don't watch if you are buying a car soon as it is overboard as to what the salesmen do lol.