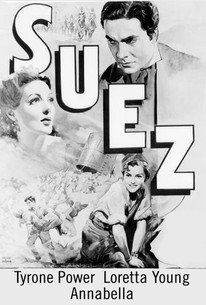 This is an epic Darryl F. Zanuck production that plays fast and loose with historical facts regarding early 19th century French politics and the building of the Suez Canal. Tyrone Power stars as Ferdinand de Lesseps, an engineer and son of a French nobleman (Harry Stephenson). At the start of the film, he is in love with Eugenie (Loretta Young), but so is the French President Louis Napoleon (Leon Ames). After his father is appointed French consul to Egypt, the younger de Lesseps travels there and conceives the idea of a canal connecting the Mediterranean and Red seas. Back in France, he is promised help by Eugenie, now Napoleon's mistress, in exchange for Count de Lesseps' agreement to dissolve the government temporarily. Napoleon then declares himself emperor, making Eugenie his empress. The elder de Lesseps dies of shock at the political betrayal, while the younger de Lesseps starts building the canal, overcoming attacks by tribal people and severe heat. France cuts off backing, and de Lesseps has to get help from England to finish the project. A sandstorm injures de Lesseps, and his French-Egyptian lover Toni (Annabella) straps him to a post to save him, sacrificing her own life for the canal. Power and Annabella married each other after the film. The descendants of de Lesseps sued 20th Century Fox for libel, but lost. ~ Michael Betzold, Rovi

A remarkable piece of historical production, with, however, considerably more emphasis on production than on history.

The historical drama suffers for being undramatic.

I noticed 10 minutes into the film that Loretta Young's dresses for any crowd scene were bigger and brighter than any other women in the scene. That's how I knew that the truth was not a priority here, or indeed even the Suez Canal of the very title. So settle back for some light drama, some light celebrity name-dropping, some costumes, some history light, and don't worry if you miss a scene or two on your way to the bathroom. Look for character actors you might've seen in others flickers - they're here hidden under make-up. Eh.