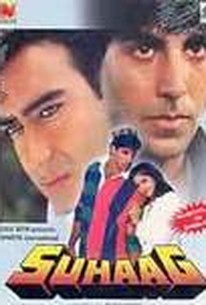 After discovering that his mother isn't actually a widow -- and that his real father is serving a jail sentence for a crime he didn't commit -- Ajay Sharma (Ajay Devgan) recruits his roguish friend (Akshay Kumar) to help him round up the corrupt official (Suresh Oberoi) who's responsible. Karisma Kapoor and Aruna Irani co-star in this blend of action and comedy from director Sandesh Kohli.

There are no critic reviews yet for Suhaag. Keep checking Rotten Tomatoes for updates!

There are no featured reviews for Suhaag at this time.