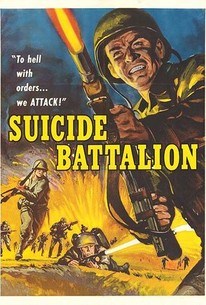 American-International's Suicide Battalion was filmed virtually simultaneously with the studio's Jet Attack; both films were originally released on a double bill. Michael Connors plays Lt. Matt McCormick, who leads the eponymous battalion on a suicide mission in the Philippines during WW II. Their objective: to destroy valuable American documents, left behind when the area was evacuated just before the Japanese takeover. Before long, only two of the volunteers are left alive to complete the mission -- and they're none too fond of each other. Hawaiian entertainer Hilo Hattie unexpectedly shows up as the proprietress of a native saloon. ~ Hal Erickson, Rovi

There are no critic reviews yet for Suicide Battalion. Keep checking Rotten Tomatoes for updates!

There are no featured audience reviews yet. Click the link below to see what others say about Suicide Battalion!