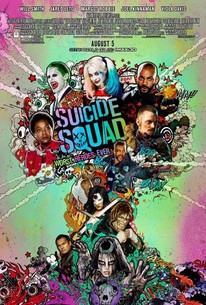 Critics Consensus: Suicide Squad boasts a talented cast and a little more humor than previous DCEU efforts, but they aren't enough to save the disappointing end result from a muddled plot, thinly written characters, and choppy directing.

Critics Consensus: Suicide Squad boasts a talented cast and a little more humor than previous DCEU efforts, but they aren't enough to save the disappointing end result from a muddled plot, thinly written characters, and choppy directing.

Critic Consensus: Suicide Squad boasts a talented cast and a little more humor than previous DCEU efforts, but they aren't enough to save the disappointing end result from a muddled plot, thinly written characters, and choppy directing.

From director David Ayer ("Fury," "End of Watch") comes "Suicide Squad," starring Oscar nominee Will Smith ("Ali," "The Pursuit of Happyness"), Oscar winner Jared Leto ("Dallas Buyers Club"), Margot Robbie ("The Wolf of Wall Street," "Focus"), Joel Kinnaman (Netflix's "House of Cards") and Oscar nominee Viola Davis ("The Help," "Doubt"). It feels good to be bad... Assemble a team of the world's most dangerous, incarcerated Super Villains, provide them with the most powerful arsenal at the government's disposal, and send them off on a mission to defeat an enigmatic, insuperable entity. U.S. intelligence officer Amanda Waller has determined only a secretly convened group of disparate, despicable individuals with next to nothing to lose will do. However, once they realize they weren't picked to succeed but chosen for their patent culpability when they inevitably fail, will the Suicide Squad resolve to die trying, or decide it's every man for himself?

Will Smith
as Floyd Lawton/Deadshot

Jared Leto
as Joker, The Joker

Robert B. Kennedy
as U.S. Marshal

Ezra Miller
as The Flash

For all its cast and crew's inglorious chest-thumping, Suicide Squad is a failed, forced exercise in - of all things! you had one job! - ensemble chemistry.

Based on the screening I attended, I can attest that audiences seemed to genuinely enjoy the jokes and get swept up in the action sequences.

It's far from perfect. But the characters are lovable, the world they live in is intriguingly weird, and all in all Suicide Squad offers a playful alternative to DC's more straightforward superhero films.

Since I'm no avid superhero fan, I hate to choose sides. However, it is clear that what Marvel does consistently is the very thing that DC Comics continues to struggle with.

This is a wasted opportunity on so many levels.

At least the soundtrack is good, with such gems as "Sympathy for the Devil," "Fortunate Son" and "Without Me." But it makes sense that no one thought to include Ozzy Osbourne's "Suicide Solution," since Suicide Squad isn't the answer to anyone's prayers.

It's plain to see now that the burgeoning comic book movie wars are over almost as soon as they began. DC seems to have no clue as to how to properly use its characters, while Marvel keeps chugging along, laughing all the way to the bank.

Director David Ayer plays with a rogues gallery of bad guys in this lurid bit of superhero fun.

Taken at face value, Suicide Squad is an argument for recruiting fascist scum to fight in America's wars overseas and, presumably, at home. Anything goes in the fight against "terrorism."

Suicide Squad had a lot of potential to be something different and exciting in the very familiar superhero movie genre. Instead, it's just another incoherent mess...

It's baffling that this movie struggled with its storyline to such a distressing degree.

Mike Massie
Gone With The Twins
View All Critic Reviews (387)

I feel as though the DC Comics franchise may have publicly performed its suicide with this film. What began with a few interesting characters, dragged on into a 40 minute exposition of the film's universe and a census of the overpopulated neighborhood. Then the big baddie is revealed -- and it makes no sense. The wheels fell off the wagon from there. Dreadful. Absolutely dreadful.

It's not nearly as bad as Man of Steel, but it's not nearly as good as a number of other movies you could watch. The plot is paper thin, it gets pretty cliche at times, and everyone's favorite part (Harley Quinn) is the most annoying in my opinion. This is 99% because I feel the coy, goofy, over-confident super hero/villain is entirely too played out, and 1% because of the way Margot Robbie says "puddin." If you're all in on the DC universe, and I don't know why you would be, you'd enjoy this film. If you're not, or if you're like me and are all out of the superhero genre all together, then don't waste your time & money (For the record, I only wasted my time).