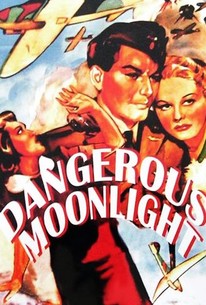 Dangerous Moonlight was the original British title for the wartime drama Suicide Squadron. Anton Walbrook plays a famed Polish composer who refuses to leave his homeland when the Nazis march in. His friends literally have to hoodwink him into leaving so that he will avoid extermination. Still anxious to avenge his countrymen, Walbrook joins a Polish air squadron headquartered in England. The film's romantic angle is personified by Sally Gray, an American newswoman whom Walbrook marries after a whirlwind courtship. The film itself is no better or worse than most others of its kind, but has remained etched in the collective memory of wartime filmgoers thanks to its omnipresent utilization of The Warsaw Concerto on the soundtrack. Financed by RKO Radio pictures, Dangerous Moonlight was distributed by Republic Pictures during the war years, though rights reverted to RKO in 1947. ~ Hal Erickson, Rovi

There are no critic reviews yet for Suicide Squadron (Dangerous Moonlight). Keep checking Rotten Tomatoes for updates!

There are no featured reviews for Suicide Squadron (Dangerous Moonlight) at this time.