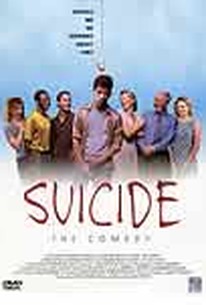 The fine line between investigating a character's feelings and wanting to kill yourself gets played for laughs in this dark comedy. Matt (Jamie Harris) is a screenwriter whose career is not going especially well and whose personal life is dwindling into nothingness. Matt starts talking with his friends about suicide, and nearly all of them become deeply concerned, convinced his depression has taken him over the edge. Matt insists to all around him that his questions about killing himself are merely part of his research for a script about a man who has turned suicidal. But his ex-girlfriend Amanda (Alison Eastwood) is the only one that seems to believe it. Suicide, the Comedy is dominated by close relatives of the rich and famous; Jamie Harris is the son of Richard Harris, Alison Eastwood is Clint Eastwood's daughter, and Chad Lowe, brother of Rob Lowe, appears in the supporting cast.

Critic Reviews for Suicide, The Comedy

There are no critic reviews yet for Suicide, The Comedy. Keep checking Rotten Tomatoes for updates!

There are no featured reviews for Suicide, The Comedy at this time.