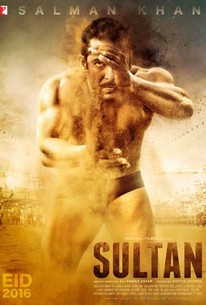 Sultan is a story of Sultan Ali Khan - a local wrestling champion with the world at his feet as he dreams of representing India at the Olympics. It's a story of Afra - a feisty young girl from the same small town as Sultan with her own set of dreams. When the 2 local wrestling legends lock horns, romance blossoms and their dreams and aspirations become intertwined and aligned. However, the path to glory is a rocky one and one must fall several times before one stands victorious - More often than not, this journey can take a lifetime. Sultan is a classic underdog tale about a wrestler's journey, looking for a comeback by defeating all odds staked up against him. But when he has nothing to lose and everything to gain in this fight for his life match... Sultan must literally fight for his life. Sultan believes he's got what it takes... but this time, it's gonna take everything he's got. "wrestling is not a sport it's about fighting what lies within"..... SULTAN

Captain America: Civil War and The Conjuring 2 Available to Stream This Week
Box Office: Pets Jets Past $100M on Opening Weekend
The Secret Life of Pets Is Funny and Colorful

Sultan is an overwrought, overblown, over-stretched sports saga. When it ended, I had moist eyes and a big grin on my face. In wrestling terms, it's an over-sized Salman slam.

Despite some of the usual Bollywood razzle-dazzle, this might be the most authentic performance Khan has done on screen in a decade.

It is a full-bodied, fully-earned performance, and Salman Khan aces it.

The artificial divide of the interval renders the film into two distinct, disjointed halves.

We all know what to expect from such a film, but it's still a lot of fun to see the underdog win.

Yes, this Salman Khan movie does leave a mark, but Salman Khan alone does not get to be the sole earner of the praise.

When it comes to entertainment, Sultan packs a solid punch.

If you're not a Salman Khan fan, give this Eid party a miss.

The performance which really impresses is Sultan's friend Govind (Anant), who stands by his buddy through broken heart and crushed rib, charming throughout.

Sultan is a Salman Khan film made solely for the superstar's fans. It has everything to please its target audience. It has megahit written all over it.

Despite these flaws and several clichés, Sultan has an emotional core that is hard to resist.

The bad guys may be missing, but Sultan has everything else that makes for a satisfying Bollywood film.

There are no featured audience reviews yet. Click the link below to see what others say about Sultan!