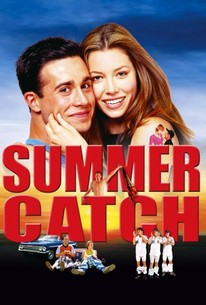 This blend of sports and youthful romantic comedy is from director Michael Tollin, who previously produced the sports drama Varsity Blues (1999). Freddie Prinze Jr. stars as Ryan Dunne, a ballplayer who's spending the summer as a pitcher for the famed, highly prestigious Cape Cod League, a non-professional farm team that has turned out numerous baseball legends. Ryan's under special pressure on a number of fronts. He's the first local boy to earn a slot in the league in years, and his blue-collar status earns him the enmity of a hot-shot college teammate, Eric Van Leemer (Corey Pearson). Although he's backed up by his best friend and team catcher Billy Brubaker (Matthew Lillard), Ryan adds more stress to his life by embarking on an affair with a beautiful, wealthy young Vassar graduate, Tenley Parrish (Jessica Biel), who's spending the summer on the Cape with her parents. Tenley is facing her own crisis as her father (Bruce Davison) pressures her to move to San Francisco and work with her uncle, though she'd rather remain in the East and become an architect. Summer Catch is the third onscreen teaming of Prinze and Lillard, and also stars Brian Dennehy, Wilmer Valderrama, Jason Gedrick, Fred Ward, and Brittany Murphy.

Grif Griffis
as Himself

Mike Liberthal
as Himself

Curt Gowdy
as Himself

Pat Burrell
as Himself

Mike Aaron
as Himself

Dave Collins
as Himself

Doug Glanville
as Himself

Ken Griffey Jr.
as Himself

Jeff Kellogg
as Himself

Mike Lieberthal
as Himself

Hank Aaron
as Himself

Mike Ribaudo
as Chatham A No.1

Matt Hobbie
as Chatham A No.2
View All

It's a movie that should have been called on account of boredom.

As the script works toward its big-game finale, it pauses now and then to rip off Bull Durham, to let Biel spout Successories-worthy words of encouragement, and to touch on subplots involving Prinze's familiar-faced teammates.

Maybe the filmmakers figured that the audience for Summer Catch is too young to have seen Bull Durham.

When it comes to funny business, Tollin's got game, and he makes the most of some talented supporting players on his bench.

Because I'm a baseball fan, I tend to be an easy mark for baseball-themed movies, but something as badly focused and feebly scripted as Summer Catch just makes me wish for the Fall.

Big chunks of plot seem to be missing, as if left on the editing-room floor so that director Mike Tollin, in his feature debut, can get to yet another inspiring speech.

It's a baseball romance with precious little baseball and only the most insipid, by-the-numbers kind of romance.

This is the WB version of a baseball movie. Everyone is young, toned, sexually active and agonizes over their future.

The film is as predictable as the outcome of a New York Yankees-Tampa Bay Devil Rays game, but you can bet nobody will be standing up to do the wave.

Not even a cast of fresh-faced acting hotshots can give flavour to this bland and undistinguished teen sporting romance.

Despite an enjoyable turn from Brittany Murphy, the clichéd plot (local poor boy pitches his way to the Major League) ensures that's the best this forgettable teen fodder can hope for.

Cute film but not much really to it.

Class consciousness sustains the primary drama in this well-intentioned little tale. Freddie Prinze Jr. plays a blue-collar kid from Cape Cod who joins a roster of college hopefuls in an effort to get signed by a professional baseball team. That portion of the story plays out reasonably well; the hero's developing relationship with wealthy Vassar graduate Jessica Biel is less successful, because Biel can't act a lick. Everytime she utters a line, the film grinds to a dead stop. The script's smarmy sexuality also doesn't help; all concerned would have been better off concentrating on baseball and male bonding.