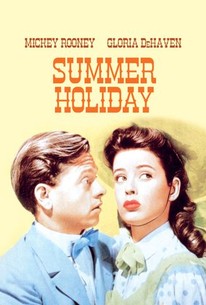 Summer Holiday is a musical remake of the 1935 MGM comedy-drama Ah, Wilderness!, which in turn was adapted from the play by Eugene O'Neill. Mickey Rooney (who played a supporting role in the 1935 film) stars as O'Neill's alter ego Richard Miller, a young man coming of age in early 20th century New England. Anxious to live life to the fullest, Richard ignores the cautionary admonitions of his father Nat (Walter Huston), preferring instead to follow the example of Uncle Sid (Frank Morgan), the family's "black sheep". In his ongoing quest for wine, women and song (he gets precious little of the first two commodities, but plenty of the third!) Richard ignores the fact that the true love of his life, sweet young Muriel (Gloria De Haven), has been under his nose all along. Director Rouben Mamoulien's obsession with cinematic innovations is largely absent here; what emerges is a staid, conventional MGM musical, albeit gorgeously photographed in Technicolor by Charles Schoenbaum. Filmed in 1946 but not released until 1948, Summer Holiday would not be the last musicalized version of Ah, Wilderness!; that honor went to the 1959 Broadway musical Take Me Along, which starred Jackie Gleason as Uncle Sid.

Where Mr. O'Neill's reminiscence of adolescent youth back in the days of peg-top trousers, of the Rubaiyat craze and the five-cent schooner of beer was a subtle and sensitive understanding, this picture is largely a big lark.

The Eugene O'Neill play, Ah. Wilderness with its account of a turn-of-the-century smalltown New England family, provides admirable setting, story, color and mood for the musical numbers and script.

It must be conceded that the film is a gay enough lark, with fine production numbers and good songs -- one in particular, "Stanley Stamer" being outstanding.

A pleasant turn of the century musical remake of the hit 1935 MGM comedy-drama Ah, Wilderness!

Mickey Rooney may not be the ideal actor to play Eugene O'Neill's alter ego, but as a nostalgic evocation of small town life at the turn of the century, Mamoulian's musical version of Ah, Wilderness is evocative, charming and nice to look at.

A sweet movie with good work by all the actors, Summer Holiday benefits immeasurably from director Mamoulian's inventiveness and the handsome cinematography and production values.

The songs are an undistinguished distraction from solid comic playing by the leads (especially Huston). And anyone familiar with previous versions will be unable to see the point.

Musicalization of Ah! Wilderness is okay with Rooney one of the oldest high school graduates you'll ever see. It's the supporting cast of Huston, Morgan, Selena Royale and Marilyn Maxwell that make the picture worth seeing. Agnes Moorehead, who looks great in the period costumes, is wasted as Cousin Lily which has been reduced from the original.