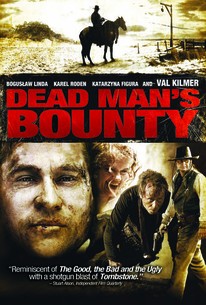 Val Kilmer stars as the corpse of a wanted man in this western exploring the greed and iniquity of the lawless frontier. When a stranger rides into a small town toting the lifeless body of a noted outlaw, his intentions are to collect the bounty and be on his way. But the situation becomes complicated when the stranger sits down for a high-stakes card game with the drunken sheriff. With nothing to wager but the body he arrived with, the stranger calls the sheriff's bluff and goes all in. Later, despite the fact that he lost the game, the stranger vows to keep the corpse at all costs.

Boguslaw Linda
as The Sheriff

Karel Roden
as The Stranger

Katarzyna Figura
as The Woman

Summer Love is fraught with feverish moods, bold imagination and a devilishly complicated exploration of the genre's iconography. It is also maddeningly paced, often like watching paint dry, albeit paint that's the garish tones of buckets of blood.

Uklanski distances himself from the material at every turn, until it's difficult to distinguish the ironist's wit from the cynic's smirk.

Summer Love feels more like a haphazard assembly of loose-knit components, jumbled together with obvious affinity for all varieties of a distinctly American genre.

A mock spaghetti western that manages to be both parody and homage, albeit less western than spaghetti.

'Whatever' is likely to be auds' response to this occasionally engaging but often ineptly made exercise in postmodern irony.

In attempting to create a shock effect of the new within the old, the baby is tossed out with the bathwater. The core pleasures of genre still have to be respected.

It's an odd, disjointed, but curiously appealing effort that could attain cult status if only for the fact that it's so incredibly strange.

By eschewing any attempt at storytelling or character development, a film with all of the Western's fecund imagery and putrid fumes still ends up feeling as flat and distant as a gallery wall.

The debut feature of artist Piotr Uklanski alleges to be the first Polish western ... There's no doubt that Uklanski has an eye: the film is full of beautifully composed shots. But that's about the end of its virtues.

Though unevenly paced, the film is a lot of fun to watch as it tries to skew and at the same time re-create the typical archetypes of the western genre.

The first Pierogi Western, Summer Love is such an observant sendup of the Spaghetti variety that it falls into the trap of parody in becoming almost too serious for its own good.

There are no featured audience reviews yet. Click the link below to see what others say about Summer Love (Dead Man's Bounty)!