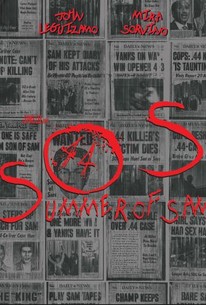 New York City's infamous summer of 1977 was a scene of disco divas and the culture clash between fashionable patrons of Studio 54 and the new wave of punk rockers who invaded Manhattan. It was also one of the hottest summers on record and produced the city's first serial killer, whom the tabloids, in a frenzy to boost their circulations, quickly dubbed "Son of Sam." With the media playing an integral role in creating mass fear and paranoia, the whole city became a hotbed of trepidation and panic, captivating not only New York, but the entire world. In director/writer Spike Lee's drama "Summer of Sam," the vicious murderer stalks his way through the Italian-American section of the Bronx, preying on innocent young women. As the temperatures and body count rise, the city becomes immersed in terror. In the desperate search for the 44-caliber killer, a Mafia boss offers a bounty for the Son of Sam. Motivated by greed and ignorance, Joey T., a 32-year-old thug, and his gang of flunkies become obsessed with the idea that Son of Sam is someone from "the neighborhood." Armed with twisted logic, the gang makes a list of everyone they think is a freak-o. The witch-hunt is on, with Ritchie, an aspiring punk rocker, becoming the focus of their suspicion and an easy scapegoat for their fears.

Jimmy Breslin
as Himself

Michael Badalucco
as Son of Sam

Reggie Jackson
as Himself

Evander Holyfield
as Man in Riot

Janet Paparazzo
as Young Woman Shot by Son of Sam

Jeff DeRocker
as Man in Car

Joanne Lamstein
as Woman in Car

Frank Cadillac
as Patty aka Man with Weird Eyes

Jacqueline Margolis
as Lady in Window

Valerie Mazzonelli
as Lady with Dog

Critic Reviews for Summer of Sam

Summer of Sam, for all its flash and well-crafted fury, is only superficially disturbing. It's a nightmare stroll down memory lane: feel-bad nostalgia.

Like most of Lee's work, this bites off more than it can chew, but the breadth and energy are impressive.

This is trashy exploitation at its clumsiest. Once more, a Spike Lee movie has been undone by the earnestness of being important.

Trouble is, the overlong narrative, however entertaining from minute to minute, is a mess.

The disappointment with Summer of Sam is not that it's exploitative; it's just difficult to figure out what it's supposed to be about.

...it was such an unexpected, marginal tale.

One of Spike Lee's most dynamic pictures, so electric and overflowing with energy it's damn near exhausting.

This ultimately disappoints, but it is good to see Lee branch out into subjects which don't immediately lend themselves to his single-minded politicizing.

Audience Reviews for Summer of Sam

A thrilling, often bizarre film, Summer of Sam is a bigger triumph than its general critical reception would make it seem due to a great ensemble and a strong screenplay.

I am usually one to dislike Spike Lee's work due to his knack for starting fights and complaining about more talented directors. Even I can admit however that Lee can at times make a good effort. Although Summer of Sam is not a great piece of cinema, this is much better film than most in Spike Lee's filmography. The cast really elevate the material, and for what it is, this is an engaging thriller from start to finish that will certainly appeal to viewers looking for a well acted movie with effective thrills. The film could have been better as well, and though Lee tries to craft something quite different from his other work, he at times feels uncertain on how to really make this a standout feature. Spike Lee has made a good film here, and though I hate the guy, I quite enjoyed this dramatic thriller. If only he would change his outlook and shut his mouth, he would be more respected. With this film, he crafts something compelling and worth seeing. This is quite different and even if it's not perfect, it's one of his better films. The film is mixed in terms of what it tries to be, but it's always engaging due to its varied cast and well thought out characters. I will be honest, I wanted to avoid this film, and I thought it wouldn't be good due to the fact that Lee's films tend to be preachy and packed with racial tension, but Summer of Sam is different and refreshing. The cast and plot are compelling and elevate Spike Lee sometimes lacking direction. I did enjoy the film, and along with Malcolm X is Spike Lee's second best directorial effort. Even Lee's haters, like me can admit that this is an entertaining film and it works due to well written characters and standout performances. You can only imagine how much better the film would have been better if someone else would have helmed the project. This is a flawed film, but better than what I initial thought.

Know what? I bet that Spike Lee would make a really brilliant zombie movie. He really excels at crafting stories about groups of characters caught in circumstances that bring out the worst in everyone. This movie reminds me a lot of Do The Right Thing, but it's made twelve years after and set ten years before. I was surprised (though perhaps I shouldn't have been) that this movie spent so little time with David Berkowitz himself and so much more with all the characters made paranoid and hostile to each other in the wake of his insane and random murders. The Son of Sam murders have fostered an atmosphere of suspicion that leads former friends and people who've grown up together to mistrust each other, form vicious little in-groups and turn on other people to make themselves feel more secure. Not unlike in The Walking Dead. These characters seem really three-dimensional and real to me, and everyone's motivations, while sometimes despicable, are at the very least understandable. I really like the way Ruby and Ritchie get into the burgeoning CBGB's punk scene and come together, and I really liked Vinny and Dionna as the profoundly unhappily married couple trying to repair their strained relationship. Are they even compatible? I love this movie. It's so human and so big, and Spike Lee tells the story with a real sense of flair and zeitgeist.

On a scene by scene basis this film is alright, but it is a mess when taken as a whole. It's like the filmmakers came in with twenty ideas and a clumsy script that does not fully develop any of them. This leaves confusion as to what message Spike Lee was trying to convey. There are moments of brilliance in this movie, accompanied by some good acting. The most noteworthy performance is Adrien Brody. Yet for every moment of brilliance, there are tedious elements that prevent the film from being great. The relationship sub-plot with John Leguizamo's character feels like a very bad soap-opera that is only related to the Son of Sam killings by sheer coincidence. This sub-plot is a time-killer that doesn't add to the overall story. Plus there are some characters that are too cartoonish to be taken as real people, which counteracts the gritty realism Spike Lee is trying to achieve. If Spike Lee had taken the time to refine the script and made it less crowded this movie could have been really great. As it is, it is a mixed bag.