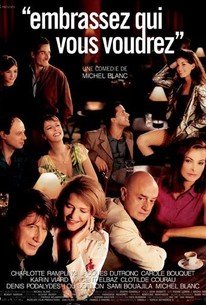 A group of friends and mutual acquaintances embark on a number of vacations -- concealed or otherwise -- for relaxation and unexpected romantic hijinks in French actor/director Michel Blanc's fourth directorial effort, the romantic ensemble comedy See How They Run. While hosting a dinner party, the well-to-do Elizabeth (Charlotte Rampling) and Bertrand Lannier (Jacques Dutronc) learn that their neighbors Veronique (Karin Viard) and Jerome (Denis Podalydes) -- who used to be successful but are currently hiding their financial woes -- will be vacationing in the same resort town at the same time. Impulsively, Elizabeth invites her friend, and fellow dinner party guest, Julie (Clotilde Courau), to join them and thus make a party out of the event. However, Bertrand backs out of the trip while claiming to have to work -- only to schedule a rendezvous with his lover, his transsexual secretary (Mickael Dolmen), instead. Meanwhile, the Lannier's teenaged daughter, Emilie (Lou Doillon), has been planning a parentally endorsed vacation to the United States with one of her friends, but is in actuality going on a romantic retreat with one of her father's employees, Kevin (Sami Bouajila). As the separate excursions commence, a number of romantic couplings spring up -- as well as a number of new friendships -- that will have long-lasting effects on all of the vacationers' lives. See How They Run received the honor of being selected for inclusion into the 2002 Montreal World Film Festival.

I suggest you read the novel before or after viewing: the double vision adds to the summery delight.

Initial impressions...are tweaked as the script drops in unknown details later on which give us a fresh slant on the characters

There are no featured reviews for Summer Things at this time.