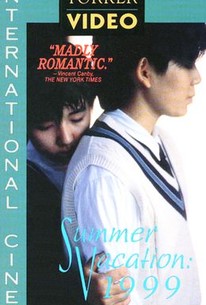 This poetic independent Japanese drama uses girls to play the young teenaged boys in the story, reminiscent of a traditional dramatic custom known as Takurazuka. The story concerns three friends who have remained at their boarding school over the summer break in order to further their studies independently. One boy is missing from the group, having recently committed suicide. A complicating factor in their interactions is that each one has a romantic crush on one of the others. Indeed, their passions for one another are so intense that the missing boy's suicide can be attributed to his unrequired love for one of them. When a new boy arrives on the scene bearing an uncanny resemblance to the dead boy, the three are not sure whether they are dealing with an elaborate joke, a spirit, or some other strange karmic destiny.

There are no critic reviews yet for Summer Vacation: 1999. Keep checking Rotten Tomatoes for updates!

There are no featured reviews for Summer Vacation: 1999 at this time.