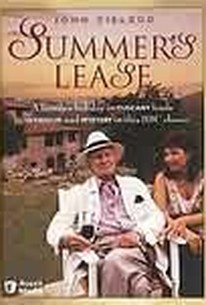 Adapted by John Mortimer from his own novel, the British miniseries Summer's Lease starred Susan Fleetwood as British housewife Molly Pargeter who, with her family, spent an eventful summer vacation at La Felicita, a villa in Tuscany. Molly had hoped to soak in the local color and revel in the artistic masterpieces all around her, but instead ended up trying to solve a couple of mysteries involving a dried-up water supply and a missing landlord (who turned out to have several shady "friends"). In the process, Molly took up with an old flame, all the while attempting to patch up her tottering marriage to the plodding Hugh Pargeter. Stealing the show (and winning several TV awards in the process) was John Gielgud as Molly's father, Haverford Downs, a libidinous and slightly daft author. First telecast by BBC2 in 1989, the four-part Summer's Lease was subsequently aired in America as part of PBS's Masterpiece Theatre anthology in the spring of 1991. ~ Hal Erickson, Rovi

There are no critic reviews yet for Summer's Lease. Keep checking Rotten Tomatoes for updates!

There are no featured reviews for Summer's Lease at this time.