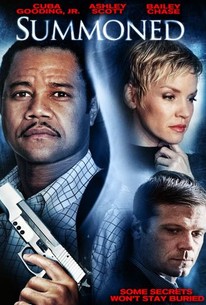 The jurors who sent a notorious serial killer to the death chamber are methodically stalked by a shadowy figure in this thriller starring Cuba Gooding, Jr. Marin County artist Laura has just weathered a difficult divorce when she sees a news report about a local man named Nathan leaping to his death from the top of a San Francisco apartment building. Deeply unnerved, she pays a visit to her old friend Frank, and together they realize that Nathan was on the jury with them when they condemned Evan Barber, aka the Midnight Murderer, to death. Later, when Frank too perishes under suspicious circumstances, Laura learns that Nathan had been writing a book about the case at the time of his death, and that someone seems willing to kill in order to cover up his findings.

There are no critic reviews yet for Summoned. Keep checking Rotten Tomatoes for updates!

Terrible acting, but I was surprised by the killer.