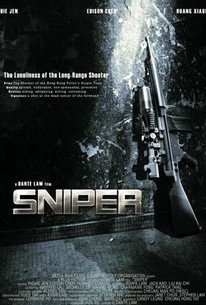 An Asian police sniper team gets cross-sectioned in this slick, über-masculine thriller from Hong Kong director Dante Lam. At the heart of it all is the warped, ongoing rivalry between psychotic ex-leader Lincoln (Huang Xiaoming) and current leader-commander Hartman (Richie Jen). Lincoln just finished four years of incarceration for manslaughter thanks to a job that didn't go as planned, leaving him with bitter hostility and resentment; moreover, each leader carries around a twisted, complicated personal history. These factors repeatedly put the two at odds, leading to an eventual onslaught of orgiastic violence and a rapidly-escalating body count.

There are no critic reviews yet for Sun cheung sau (Godly Gunslingers) (The Sniper). Keep checking Rotten Tomatoes for updates!

The Sniper is a decent Hong Kong thriller from Dante Lam.

The run time may be under 90 minutes, but it doesn't feel that short. It isn't that the film sucks, but more the fact that it is a tad slow and boring at times. The plot itself isn't too bad, despite the fact that there is a mini-twist near the end which doesn't do much. However, the plot isn't that great either. One can see that the characters are being built, but it just isn't done effectively, as there isn't much to care for in them.

When all is said and done, this film comes down to the sniping, and this is what we want to see. There is a moderate amount of action, which is quite good, and most of it comes in the final 30 minutes. Believe it or not, but one of the better sequences doesn't even involve sniper rifles.

Richie Ren, Xiamong Huang, and Edison Chen give modest performances. When compared to the first two, Chen has the least amount of airtime. This is unfortunate since he does have an integral role in the story.

The Sniper isn't a waste of time, but it isn't a film to rush out for. Fans of Hong Kong crime thrillers should check it out if time arises.

An entertaining, yet mindless action movie. While it features some cool sniping action, and decent performances from all the cast members, the story line is so full of cliches, and crappy dialogue that its easy to forget a lot of what happened. Nevertheless, this is as good as stupid, and derivative action movies can get, so its at least worthy of a rental